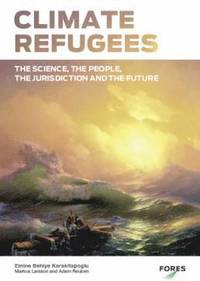 av Emine Behiye Karakitapoglu, Markus Larsson, Adam Reuben
Pocket Engelska, 2017-10-06
69
Köp
Spara som favorit
Kan levereras innan julafton!
Climate change is a fact that threaten the most basic human needs, from food and water to human settlement patterns. One of the major consequences from climate change will be the flow of people who will leave their homes because of the changing environment and its impact on their livelihoods. In other words, they will become "climate refugees". It is difficult to predict the scale of climate migration since migration is multi-casual. Nevertheless, a commonly used estimation indicates that 200 million people will be displaced due to climate change by 2050.

The intergovernmental Panel on Climate Change wrote in its 1990 report that "the greatest single impact of climate change could be on human migration", and there has since been considerable interest in the issue of migration and climate change. The international community has for example made efforts to address the challenge of "climate refugees" by, for example, including reference to migration in the United Nations Framework Convention on Climate Change, the United Nations High Commissioner for Refugees considering areas hosting refugees as "hot spots" for climate change and the International Organization for Migrations MECLEP project. Furthermore, the international community have gathered around the Paris Agreement, the Sustainable Development Goals and the Nansen Initiative Protection Agenda. However, legal recognition and adequate protection of "climate refugees" is still lacking.

This report examines the most important aspects of climate migration issues as comprehensively as possible, and strives to identify the significance and magnitude of possible climate migrations flows. Our target is to answer som basic and highly functional questions in order to create a report which will help the reader grasp the issue and support policymakers and other actors involved in developing the most suitable policies on the issue.
Visa hela texten