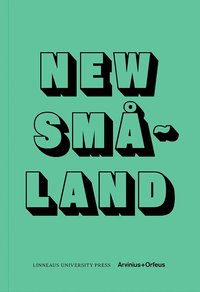 av Abraham Hurtado, Anders Sunna, Ane Graff, Ane Hjort Guttu, Ann Mirjam Valka
Häftad Engelska, 2020-08-14
239
Köp
Spara som favorit
Finns i lager! Skickas inom 1-2 vardagar.
Fri frakt inom Sverige för privatpersoner.
New Småland investigates issues of entrepreneurship, immigra tion and emigration, and looks in various ways at the relationship between the rural and the urban. These three themes characterise both a common and a historical understanding of Småland. The project examines questions such as: What happens in the transition from glass industry to tourism? How can a region that is depopulated, grow and develop at the same time? How did the centre of town end up in a field? What does the relationship between Småland and Swedish Minnesota look like today? Do artists and designers know about the knowledge base and poten tial that exists in Småland s industries? Do local manufacturers know which artists and designers that work in the area and what their skills and ambitions are?

By asking these questions and developing different approaches to creating a dialogue between international contemporary art and local knowledge, we can start to advance an updated picture of Småland.

This book also presents the string of exhibitions that took place from 2019 to 2020 and the processes that led to them. The texts gathered here reflect on the conferences, seminars, residences, workshops and international collaborations that have taken place in Småland during the past four years, and the book as a whole highlights a model that supports long-term relationships and at the same time allows for experimentation. It emphasises and en gages with local actors and accentuates the role of contemporary art in Småland today.