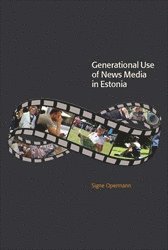 Generational Use of News Media in Estonia : Media Access, Spatial Orientations and Discursive Characteristics of the News Media

av Signe Opermann
Häftad Engelska, 2014-10-01
239
Köp
Spara som favorit
Skickas inom 3-6 vardagar.
Fri frakt inom Sverige för privatpersoner.
Contemporary media research highlights the importance of empirically analysing the relationships between media and age, changing user patterns over the life course, and generational experiences within media discourse beyond the widely hyped buzz terms such as the 'digital natives", 'Google generation", and other digitally and technologically capable generation groups. This doctoral thesis seeks to define the 'repertoires" of news media that different generations use to obtain topical information and create their 'media space". It contributes to the development of a framework within which to analyse generational features in news audiences by putting the main focus on the cultural view of generations. This perspective was first introduced by Karl Mannheim in 1928. Departing from his legacy, generations can be better conceived as social formations that are built on self-identification, rather than equally distributed cohorts. With the purpose of discussing the emergence of various 'audiencing" patterns from the perspectives of age, life course and generational identity, the thesis presents Estonia - a post-Soviet Baltic state - as an empirical example of a transforming society with a dynamic media landscape which is witnessing the expanding impact of new media and a shift to digitisation.

The thesis is based on data from two nationally representative cross-section surveys on media use and media attitudes (conducted during the 2002-2012 period) and focus group discussions, that are used to map similarities and differences among five generation cohorts born between 1932 and 1997 with regard to the access and use of the established news media, thematic preferences and spatial orientations of media use, and discursive approach to news formats.

The findings demonstrate remarkable differences between the cohorts, suggesting that they could be merged into three main groups that represent the prevailing types of relations with the news media. Yet, the study also reveals that attitudes and behaviour (including media behaviour), are not necessarily divided by year of birth, but are more and more dispersed along individualised interests and preferences.
Visa hela texten

Bloggat om Generational Use of News Media in Estonia...