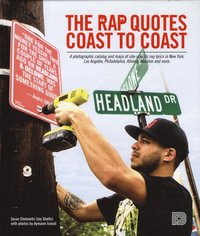 The Rap Quotes Coast to Coast

I remember getting a call that I was used for a Rap Quote. I was so amazed and honored to be included. It s so good to see the culture being embraced and spread around like this all across the world! Bun B

That s a really dope one bro, all my Brooklyn n----s hitting me bout it. They love it. Prodigy

Every time I write a lyric about my city, it s like a little love note. But never in a million years did I think that those words would be printed up and hand delivered. I was beyond stoked. And when he posted those same lyrics on the walls of my favorite art gallery in the city next to a bunch of other MC s I respect?! That was the icing on my vegan cupcake. Thanks Jay Shells. Murs

At the time, Instagram was fairly new and s till mostly a photography app. I was running around historical locations in Queens taking pics for my account, when someone sent me a pic of the quote. I was like no way in hell. I drove to the location and took crazy pics. I was really proud to show everyone because South Jamaica is so influential to my career. Pharoahe Monch

Felt real good hearing and seeing my lyrics used for Rap Quotes signs by Jay Shells. What made it most special is for the people in my hood to be proud for me to be rappin naming the corners we stood on and the people we lost. Thirstin Howl III

My phone was blowing up the day my sign went up on the corner of the block I was raised on. My family was so proud. It meant and s till means a lot to me. I have a framed picture of it in my home. Tone Trump

I remember going back to my neighborhood to see the sign go up. It was a nostalgic moment to be standing next to the field where I played sports, behind the housing project building where I was raised. I took a photo and posted it. The next day it was stolen, that s Brownsville. Masta Ace

When I first started seeing the Jay Shells street signs, I immediately thought about how the rhythm and poetry of hip hop has allowed generations to connect and travel the world using their imagination. I thought about the streets that I ve mentioned in my own stories, and how important they ve been to my development as a person and as an artist. I even imagined how some of my lyrics might look in this unique creative format, so I feel honored and s till a bit shocked that it manifested almost exactly as I saw it. Having my art presented in such an authentic and dynamic way means much more to me than having my name in corporate lights. Salute to Jay Shells. Rakaa (Iriscience), Dilated Peoples