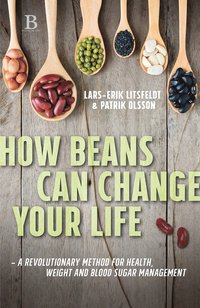 How beans can change your life ? A revolutionary approach to health, weight and blood sugar (e-bok)

Just like the famous English physician and author Michael Mosley, the man behind the 5:2 diet, the authors of this book also experimented on themselves. In some instances, that"s what you have to do, due to the lack of research ... One of the authors started eating a contrary diet to the advice by dietitians, 14 years ago. The other author, by eating more and completely differently than you really should by standard dietary advice for diabetes patients.

But beans... hello...?
Can consumption of beans really have a positive impact on health? Aren"t beans just packed with carbohydrates? At least the authors of this book, Lars-Erik Litsfeldt and Patrik Olsson, didn"t believe beans could be benficial when the subject came up. As low carb eaters, they could easily see it was totally against the low carb philosophy where beans are banned due to the high levels of carbohydrates.

However, after Patrik and his girlfriend had done some experimenting a very clear pattern started to show. Patrik is a type 1 diabetic and he could see how body fat started to disappear and blood sugars was normalizing. After adding beans Patrick lost 55 pounds in two months. Another good example of effectiveness is Patrik"s girlfriend who initially lost 44 pounds with low carb eating and exercise. After adding beans and changing to another kind of training described in this book she lost another 88 pounds. That means she has now cut her initial weight in half. Both Patrik and his girlfriend have checked their blood sugar minute by minute to see what food is good for them. This is an almost unique mini study.

Take part in this thrilling journey and discover how you can actually eat more and get a healthier life. The book includes delicious recipes with beans as well as examples of highly effective yet less time consuming training.

Lars-Erik Litsfeldt, a type 2 diabetic, has written several books about diabetes and weight problems, the first book Fettskrämd (Fear of fat, 2003) was the first. His books have sold well over 100,000 copies and are published in five (soon six) languages. Litsfeldt has several tv appearances as well as health seminars behind him and a quite renowned speaker in the LCHF diet circles.

Patrik Olsson has had type 1 Diabetes since he was a child. His eye sight became increasingly damaged by blood sugar spikes, with the result that he is now completely and irreversibly blind.
Visa hela texten