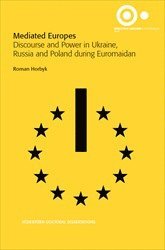 Mediated Europes : Discourse and Power in Ukraine, Russia and Poland During Euromaidan

av Roman Horbyk
Häftad Engelska, 2017-11-24
259
Köp
Spara som favorit
Skickas inom 3-6 vardagar.
Fri frakt inom Sverige för privatpersoner.
The national narratives of Europe in Ukraine, Russia and Poland are characterised by a dependence on the West. Historically, these narratives vacillated between idealising admiration, materialist pragmatics and geopolitical demonising. They have been present in each country to some extent, intertwined with their own identification.

These discourses of Europe were rekindled and developed on during Euromaidan (2013-2014). Nine major Ukrainian, Russian and Polish newspapers with diverse orientations struggled to define Europe as a continent, as the EU or as a set of values. Political orientation defined attitude; liberal publications in all three countries focused on the positives whereas conservative and business newspapers were more critical of Europe. There were, however, divergent national patterns. Coverage in Ukraine was positive mostly, in Russia more negative and the Polish perception significantly polarised.

During and after Euromaidan, Ukrainian journalists used their powerful Europe-as-values concept to actively intervene in the political field and promote it in official foreign policy. This was enabled by the abandoning of journalistic neutrality. In contrast, Russian and Polish journalists were more dependent on the foreign policy narratives dispensed by political elites and more constrained in their social practice.

Roman Horbyk accomplished his BA and MA degrees at Kyiv National Taras Shevchenko University. He then received an international Master"s degree in 2012 with a joint certificate from the Universities of Aarhus and Hamburg. This is doctoral dissertation.
Visa hela texten