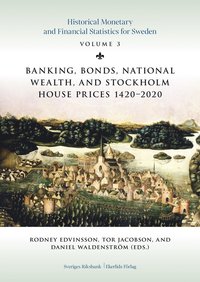 Sveriges Riksbank is one of the oldest central banks in the world, if not the oldest. In its infancy, in the 17th century, the Riksbank was also the only bank in Sweden. But many more banks, of varying orientation and organisation, emerged in the following centuries. In two chapters, covering an early period from 1770 to 1870 and a modern banking period from 1870 onwards, a broad description of the scope of the Swedish banking industry over time is provided.

In four chapters, a new house price index is presented for Stockholm from the Middle Ages to the present. The index shows that the increase in real house prices in the last few decades is matched by similar-sized increases occurring in the 17th and 19th centuries. These two historic episodes were followed by periods of secular stagnation, or even decline. All three long upturns in house prices can be related to periods of strong urbanisation. Sharp downturns have occurred due to various macroeconomic shocks, for example wars or financial crises. During these downturns, nominal prices have tended to decline less than real prices.

The Swedish bond market emerged almost two hundred years ago. During the 19th century, private-sector bond loans issued by mortgage institutions and corporations to foreign lenders dominated. In the 20th century, government borrowing has dominated the market and the role of domestic lenders has increased. The national wealth of Sweden has transformed over the past two centuries. Private agrarian estates were the dominant assets in the 19th century, but the 20th century saw the emergence of financial assets and liabilities and also public-sector net wealth.
Visa hela texten