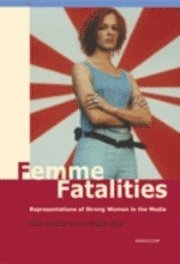 Femme fatalities. Representations of strong women in the media

av Anne Gjelsvik
Kartonnage Svenska, 2004-11-01
319
Köp
Spara som favorit
From sadistic torturess Ilsa in Ilsa, She-Wolf of the SS to synthespians and consumerist teen witches. From Hollywood mainstream to avant-garde and exploitation. From feminist critical theory to postfeminist provocative aesthetics. This anthology brings together twelve essays on the representation of strong women in film, television and computer games. During the nineties strong women moved to the fore in media fictions. In cinema, television series and computer games we find heroines in leading roles that used to be occupied by men. Female doctors run their own medical drama series, women star in action and suspense computer games, they kick ass, fight vampires and become elite soldiers in Hollywood movies. The success of strong women is beyond discussion; we find them everywhere from Xena: Warrior Princess to Baise-Moi and Lara Croft: Tomb Raider. However, the representation of strong women raises complex questions related to gender and genre, identity and identification, pleasure and violence. Do these heroines appeal to women at all? If so, what pleasures do they offer? Are they consumerist products in a patriarchal culture? Are they action heroines submitting to the traditional aesthetics of the pin-up and the narrative subplots of rape, prostitution and domestication through romance? Or is it possible to kidnap a male fantasy and turn it into a feminist icon for a new postfeminist generation? The articles in this anthology do not provide simple answers. Instead, they find new meanings arising out of the gaps between consumer culture and gender politics, between silicone breasts and subversive audience reactions.
Visa hela texten