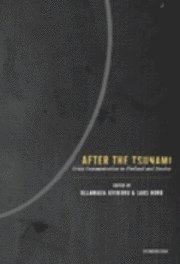 After the Tsunami : crisis communication in Finland and Sweden

av Ullamaija Kivikuru, Lars Nord, Jesper Falkheimer, Johanna Jääsaari, Mervi Pantti
Häftad Engelska, 2009-10-13
299
Köp
Spara som favorit
Skickas inom 10-15 vardagar.
Fri frakt inom Sverige för privatpersoner.
In the morning on Boxing Day, December 26 2004, an earthquake west of Sumatra caused two enormous sea waves, or tsunamis, which struck the coastlines of the Indian Ocean. In total, more than 286 000 people were killed in one of the worst natural disasters in history. The tsunami was hitting the poorest people in the poorest coastline parts of the poorest countries most heavily. Worst hit was the Aceh Province in Indonesia, although Sri Lanka, India and Thailand also suffered heavy losses in human lives due to the disaster.
However, the Asian tsunami also affected a large number of tourists from other parts of the world, spending their Christmas and New Year holiday in resorts along the coastlines of Thailand and Sri Lanka. Thus, the effects of the Asian tsunami reached societies very far away from the disaster area.
Accordingly, there were many Finnish and Swedish citizens in the area when the tsunami occurred. In total, 178 Finns and 543 Swedes were killed in the catastrophe. Thus, the Asian tsunami caused the largest number of lost lives in Finland since the Second World War. In Sweden, the tsunami disaster caused about as many deaths as when the Estonia ferry sank in the Baltic Sea in 1994. In both countries, the tsunami disaster can be described as one of the worst catastrophes experienced during the post-war period.
Visa hela texten