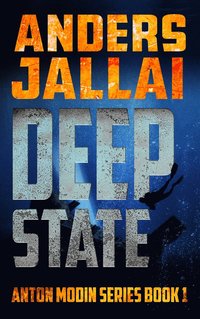 The most secretive organization in Sweden operates without any accountability to the people, hiding in the shadows: Deep State.
Anton Modin, a former Military Intelligence Special Ops officer, is obsessed with exposing his former employer and boss, the ever present and enigmatic Lieutenant Colonel Chris Loklinth. Modin lost loved ones, his two children and beloved wife, in the M/S Estonia ferry disaster in 1994. In great despair, even 14 years later, he still accuses his former department, Special Ops, to have had a part in the accident. What he doesn"t know is that since the end of World War II, Special Ops has been cooperating closely with both the American CIA and the British MI6; together these organizations represent the Deep State. Something deeply secret in the kingdom of Sweden.

Deep State offers the reader an abundance of detail about Sweden"s hidden past which casts its shadow well beyond democratic control even today. Owing to his profound knowledge of intelligence matters, Swedish bestselling author Anders Jallai has written a thriller rooted in contemporary Swedish and international intelligence history. The book is based on a true story.
Drawing heavily on his background in the Swedish Navy Seals, as a fighter pilot, and a commercial airline captain, Anders Jallai is now writing and researching full time. He has so far published five books in Scandinavia. Deep State is the first of his Anton Modin series.

"Anders Jallai, a Swedish Frederick Forsyth, only better, should have a worldwide audience, while his choice of subject anchors him firmly within Nordic reality."
Ragnhild Artimo, Forum for Economy and Technology, Helsinki.

"This is a book about men and for men, if you see what I mean. Anders Jallai is one of few who can create this kind of suspense."
DAST Magazine

"Jallai 's book is full of content and bloody action. The descriptions of the Stockholm archipelago are most attractive."
P.G. Näss, Head of Swedish Security Service 1978-1987.

"Anders Jallai is comparable to writers like John le Carré and Fredric Forsyth. (...) He is a great stylist and knows how to mesmerize the reader."
Mats Garme, Ölandsbladet, Swedish tabloid

ABOUT THE AUTHOR:
Anders Jallai, Sweden's Number 1 author of political thrillers, draws from his experiences with the Swedish Navy Seals and the Swedish Air Force in the final years of the Cold War. His background as a fighter pilot, a commercial airline captain, and a professional diver naturally flows into his edge-of-your-seat thrillers. His first three novels were originally published in Sweden.

Anton Modin, a middle-aged disillusioned former Special Ops agent who lost his wife and two kids in a ferry disaster, wants nothing more than be left alone in Gris...
Visa hela texten