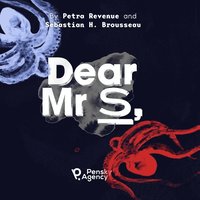 "When my father died, I inherited his lawyer. I want you to meet him, through this ambivalent and remarkable exchange of letters. Mr Brousseau, the Mr S in the project, helped my brother and me deal with my father's estate. Our correspondence began when he discovered my profession as a writer and our common interest in art. He said he had a story. He told me about a man who had been convicted of manslaughter. While in prison in his native Canada, he decided to become a lawyer. I realized quite soon that the man he was telling me about was himself. Sebastian and I corresponded for three years. Our exchange investigated issues such as equality, debt, death, life, art, love, surrogacy, losing a parent, surviving in prison, defining oneself on different sides of the prison bars, relationships in different parts of the world and, of course, the meaning of language. As we wrote, we developed a strong bond and a private friendship." Petra Revenue