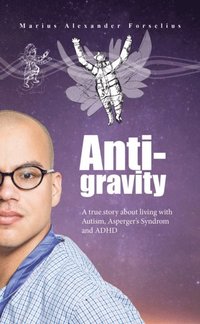 A true story about Autism

av Marius Alexander Forselius
E-bok (EPUB - DRM), Engelska, 2018-10-14
109
Ladda ned
Spara som favorit
Laddas ned direkt
Läs i vår app för iPhone, iPad och Android
**Alpha version, work in progress, see notice at the end of the text**Marius Alexander Forselius was born in Romania 1991, only a few years after the Romanian communist regime was overthrown in december 1989. He was adopted to Sweden in 1994, and got diagnostized with autism at five year age. In this book he explains the in and out of his life with his disorder, and describes how his life have been until now, with success and failures, and strategies to success. One thing he explains is how he through meditation and physical exercise could defy the gravity and get in contact with his feminine spirit, when he swim or meditate, and how the different twists in his life have gave him new insights and strength. For example, he explains about his water visualization meditation - which helped her to find his inner soul, after a fungal infection forced he to stop swimming, and how his &quotevirtual bathing&quote (as he explains), helped him to recover mentally from the fungal crisis and at the same time feel more confident in himself. With the computer as analogy, he explains how his brain works, like a computer system which &quoteiterates the whole tree structure&quote without filter to he context, and then being overload and freezes. And he also explains about his creative career, in music and software engineer studies, and how his music interest was the key to resolve the 'fungal crisis'.Note: This is a translation in ALPHA of my Swedish book &quoteJag Upphver Gravitationen&quote that were a mixture of human and machine translation in order to be able to get an international version as soon as possible. Spelling and grammar errors might are present. I will provide a more accurate translation at a later time. This book contains a subset of the chapters from the original Swedish edition.
Visa hela texten