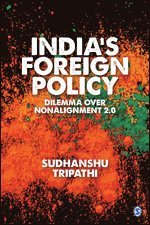 av Sudhanshu Tripathi
Inbunden Engelska, 2020-01-15
1079
Köp
Spara som favorit
Finns även som
Visa alla 2 format & utgåvor
India?s Foreign Policy Dilemma over Non-Alignment 2.0 presents the story of India?s quest for renewed focus on the doctrine of Non-Alignment. It begins with a discussion on the evolution of India?s Foreign Policy along with the origin of its most important pillar, Non-Alignment, and its cumulative effect in India and abroad. It further discusses challenges, compulsions and constraints for India?s Foreign Policy in context of the current instability and insecurity due to mounting Chinese and Pakistani collusion against India?s rising profile in Asia, the emerging Pyongyang?Beijing?Moscow axis against the US, the evolving US?China bipolar world order in the background of eastward shifting geopolitics, economic recession and terrorism. The book argues that it is incumbent upon India to take a fresh lead today to reinvent the doctrine not only for its own national interests but also for the entire Third World. It proposes various steps to revitalize India?s Foreign Policy so that India can play a desired role in the present global order.
Visa hela texten

“India's present foreign relationship policy which is based on "Panchsheel" formulated by the then PM of India Shri. Jawaharlal Nehru. Though it is still relevant to some extent at the present moment, they way in which it could be improved has been explained really well by the author…The comparison between the action/step taken by Shri. Jawaharlal Nehru with that of Shri. Narendra Modi needs a special mention.”

Sudhanshu Tripathi is Professor, Political Science, at Uttar Pradesh Rajarshi Tandon Open University (UPRTOU), and Director (Incharge) at School of Social Sciences, UPRTOU. He has been teaching political science and international relations for the past three decades. He takes keen interest in reading and writing on contemporary and current issues of national and international significance. His book NAM and India and a co-authored book in Hindi Rajnitik Avadharnayein have been published besides numerous articles and research papers published in several national and international journals and magazines, including online journals. Besides academic activities, the author actively participates in social activities in the larger interest of humanity. He organized a mass awareness rally in 2011 against massive corruption, particularly at public places of higher institutions, in the wake of Anna Hazares ongoing fast unto death against corruption in New Delhi. He was the president of the Teachers Association in MDPG College, Pratapgarh, Uttar Pradesh, during 20132017 and was also the vice-president of the Shikshak Mahasangh in the district unit of Pratapgarh during the same period. He was awarded with the Saraswat Samman by Pt. S. R. Institute of Education and Technology (PG College), Pratapgarh, on Shikshak Divas (Teachers Day) in 2016 and was also honoured on the same day in 2019 by Lions Club Allahabad Central at UPRTOU, Prayagaraj (UP).He also organized a Run for Unity in UPRTOU, Prayagraj, on National Integration Day in 2017, apart from discharging a variety of responsibilities in the corporate field and management of the university as well as society. He is also on the Editorial Advisory Board of the Third Concept journal.