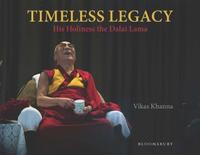 His Holiness the Dalai Lama

av Vikas Khanna
Inbunden Engelska, 2015-07-06
289
Köp
Spara som favorit
The Timeless Legacy: His Holiness the Dalai Lama is a celebration, a journey and show of reverence to His Holiness the Dalai Lama who celebrates his 80th birthday on July 6, 2015. The book traces HH the Dalai Lama's journey visually through hundreds of photographs set alongside 80 questions that encapsulate his 80 years. Each exquisite picture tells a million stories, and the questions are an eclectic mix of deep insights, observations, and a tete-e-tete with His Holiness unveiling an endearing and mischievous child hidden behind the spiritual leader. The book traces a journey of trust, belief, friendship, struggle, and compassion through its beautiful visuals and dialogue.
Visa hela texten

Vikas Khanna is an award winning, Michelin Starred Indian chef, restaurateur, food writer, filmmaker, humanitarian and the host of MasterChef India, Junior MasterChef India and Twist of Taste on FOX Traveller. Vikas has received the prestigious Michelin Star for his restaurant Junoon for 4 consecutive years now. He was honored with the Rising Star Chef Award by Star Chefs for his role in shaping the future of American Cuisine. He has received several international awards for his books. He lives in New York City.