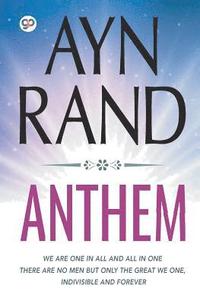 av Ayn Rand, General Press
Häftad Engelska, 2019-05-24
89
Köp
Spara som favorit
Skickas inom 10-15 vardagar.
Gratis frakt inom Sverige över 159 kr för privatpersoner.
Finns även som
Visa alla 9 format & utgåvor
Anthem is a dystopian fiction novella by Ayn Rand, written in 1937, and first published in 1938 in England. The story unfolds within a society in which all traces of individualism have been eliminated from every aspect of life-use of the word 'I' is a capital offense. The hero, a rebel who discovers that man's greatest moral duty is the pursuit of his own happiness, embodies the values the author embraced in her personal philosophy of objectivism-reason, ethics, volition, and individualism.
Hailed by The New York Times as ""a compelling dystopian look at paranoia from one of the most unique and perceptive writers of our time,"" this brief, captivating novel offers a cautionary tale.
Visa hela texten

Ayn Rand was an American novelist, philosopher, playwright, and screenwriter. She is known for her two best-selling novels, The Fountainhead and Atlas Shrugged, and for developing a philosophical system she called Objectivism. Born and educated in Russia, Rand moved to the United States in 1926. She had a play produced on Broadway in 1935-1936. After two early novels that were initially unsuccessful in America, she achieved fame with her 1943 novel, 'The Fountainhead'. In 1957, she published her best-known work, the novel Atlas Shrugged. Afterward, she turned to non-fiction to promote her philosophy, publishing her own magazines and releasing several collections of essays until her death in 1982. Rand advocated reason as the only means of acquiring knowledge and rejected faith and religion. She supported rational and ethical egoism, and rejected altruism. In politics, she condemned the initiation of force as immoral and opposed collectivism and statism as well as anarchism, instead supporting laissez-faire capitalism, which she defined as the system based on recognizing individual rights. In art, Rand promoted romantic realism.