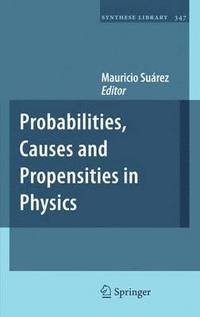 Probabilities, Causes and Propensities in Physics

av Mauricio Suarez
Häftad Engelska, 2013-01-25
1539
Köp
Spara som favorit
Skickas inom 10-15 vardagar.
Fri frakt inom Sverige för privatpersoner.
Finns även som
Visa alla 2 format & utgåvor
This volume defends a novel approach to the philosophy of physics: it is the first book devoted to a comparative study of probability, causality, and propensity, and their various interrelations, within the context of contemporary physics -- particularly quantum and statistical physics. The philosophical debates and distinctions are firmly grounded upon examples from actual physics, thus exemplifying a robustly empiricist approach. The essays, by both prominent scholars in the field and promising young researchers, constitute a pioneer effort in bringing out the connections between probabilistic, causal and dispositional aspects of the quantum domain. The book will appeal to specialists in philosophy and foundations of physics, philosophy of science in general, metaphysics, ontology of physics theories, and philosophy of probability.
Visa hela texten

From the reviews: "This book discuss in a detailed and technical, but accessible and clarifying way, the notions that connect physics with philosophical analyses of causation, probability and propensities. ... The chapters are well written and define the relevant concepts in a clear way, which allows one to follow the discussions with ease. ... discuss the most recent accounts of causality, propensity and probability and add new and important insights to the discussion. ... recommended to philosophers of physics and physicists interested in the foundations of their discipline." (Esteban Cespedes, Physics and Philosophy, November, 2011)