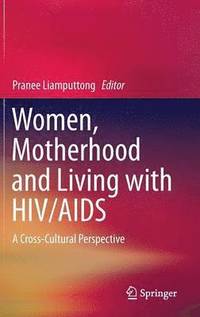 Women, Motherhood and Living with HIV/AIDS

av Pranee Liamputtong
Inbunden Engelska, 2013-03-12
1379
Köp
Spara som favorit
Skickas inom 3-6 vardagar.
Fri frakt inom Sverige för privatpersoner.
Finns även som
Visa alla 2 format & utgåvor
There are about 34 million people worldwide living with HIV/AIDS. Half are women. There has been a dramatic global increase in the rates of women living with HIV/AIDS. Among young women, especially in developing countries, infection rates are rapidly increasing. Many of these women are also mothers with young infants. When a woman is labeled as having HIV, she is treated with suspicion and her morality is being questioned. Previous research has suggested that women living with HIV/AIDS can be affected by delay in diagnosis, inferior access to health care services, internalized stigma and a poor utilization of health services. This makes it extremely difficult for women to take care of their own health needs. Women are also reluctant to disclose their HIV-positive status as they fear this may result in physical feelings of shame, social ostracism, violence, or expulsion from home. Women living with HIV/AIDS who are also mothers carry a particularly heavy burden of being HIV-infected. This unique book attempts to put together results from empirical research and focuses on issues relevant to women, motherhood and living with HIV/AIDS which have occurred to individual women in different parts of the globe. The book comprises chapters written by researchers who carry out their projects in different parts of the world, and each chapter contains empirical information based on real life situations. This can be used as evidence for health care providers to implement socially and culturally appropriate services to assist individuals and groups who are living with HIV/AIDS in many societies. The book is of interest to scholars and students in the domains of anthropology, sociology, social work, nursing, public health & medicine and health professionals who have a specific interest in issues concerning women who are mothers and living with HIV/AIDS from cross-cultural perspective.
Visa hela texten

From the book reviews: "This is a book that any scholar interested in HIV and women studies should add to his or her personal library. It presents a state-of-the-art outline of recent studies-mainly through different types of qualitative methods-supplemented with a plethora of appropriate references. ... this book is a comprehensive source to acquire a cross-cultural perspective on HIV and women studies, providing guidance for both health professionals and policy makers." (Ines Aristegui, Applied Research Quality Life, Vol. 9, 2014)

Pranee Liamputtong holds a Personal Chair in Public Health at the School of Public Health, La Trobe University, Melbourne, Australia. Pranee has previously taught in the School of Sociology and Anthropology and worked as a public health research fellow at the Centre for the Study of Mothers' and Children's Health, La Trobe University. Pranee has a particular interest in issues related to cultural and social influences on childbearing, childrearing and women's reproductive and sexual health. She has published several books and a large number of papers in these areas. Her books in the health area include: Maternity and reproductive health in Asian societies (with Lenore Manderson, Harwood Academic Press, 1996); Hmong women and reproduction (Bergin & Garvey, 2000); Coming of age in South and Southeast Asia: Youth, courtship and sexuality (with Lenore Manderson, Curzon Press, 2002); and Health, social change and communities (with Heather Gardner, Oxford University Press, 2003). She has also recently published books titled The journey of becoming a mother amongst women in northern Thailand (Lexington Books, 2007); and Reproduction, childbearing and motherhood: A cross-cultural perspective and Childrearing and infant care: A cross-cultural perspective (Nova Science, 2007). The most recent book that she published is Community, health and population (with Sansnee Jirojwong, Oxford University Press, 2008) and Infant feeding practices: A cross-cultural perspective (Springer 2010). She is now completing a book on Motherhood and Postnatal Depression: Narratives of Women and their Partners, for Springer (with Carolyn Westall), and will be published in early 2011.