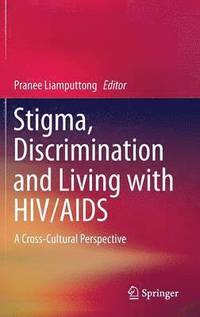 Stigma, Discrimination and Living with HIV/AIDS

av Pranee Liamputtong
Inbunden Engelska, 2013-04-23
1829
Köp
Spara som favorit
Skickas inom 3-6 vardagar.
Fri frakt inom Sverige för privatpersoner.
Finns även som
Visa alla 2 format & utgåvor
Up until now, many articles have been written to portray stigma and discrimination which occur with people living with HIV/AIDS (PLWHA) in many parts of the world. But this is the first book which attempts to put together results from empirical research relating to stigma, discrimination and living with HIV/AIDS. The focus of this book is on issues relevant to stigma and discrimination which have occurred to individuals and groups in different parts of the globe, as well as how these individuals and groups attempt to deal with HIV/AIDS. The book comprises chapters written by researchers who carry out their projects in different parts of the world and each chapter contains empirical information based on real life situations. This can be used as an evidence for health care providers to implement socially and culturally appropriate services to assist individuals and groups who are living with HIV/AIDS in many societies. The book is of interest to health care providers who have their interests in working with individuals and groups who are living with HIV/AIDS from a cross-cultural perspective. It will be useful for students and lecturers in courses such as anthropology, sociology, social work, nursing, public health and medicine. In particular, it will assist health workers in community health centres and hospitals in understanding issues related to HIV/AIDS and hence provide culturally sensitive health care to people living with HIV/AIDS from different social and cultural backgrounds. The book is useful for anyone who is interested in HIV/AIDS-related stigma and discrimination in diverse social and cultural settings.
Visa hela texten

Pranee Liamputtong holds a Personal Chair in Public Health at the School of Public Health, La Trobe University, Melbourne, Australia. Pranee has previously taught in the School of Sociology and Anthropology and worked as a public health research fellow at the Centre for the Study of Mothers' and Children's Health, La Trobe University. Pranee has a particular interest in issues related to cultural and social influences on childbearing, childrearing and women's reproductive and sexual health. She has published several books and a large number of papers in these areas. Her books in the health area include: Maternity and reproductive health in Asian societies (with Lenore Manderson, Harwood Academic Press, 1996); Hmong women and reproduction (Bergin & Garvey, 2000); Coming of age in South and Southeast Asia: Youth, courtship and sexuality (with Lenore Manderson, Curzon Press, 2002); Health, social change and communities (with Heather Gardner, Oxford University Press, 2003); The journey of becoming a mother amongst women in northern Thailand (Lexington Books, 2007); Reproduction, childbearing and motherhood: A cross-cultural perspective(Nova Science, 2007);Childrearing and infant care: A cross-cultural perspective (Nova Science, 2007); and Community, health and population (with Sansnee Jirojwong, Oxford University Press, 2008). Her most recent books includeInfant feeding practices: A cross-cultural perspective (Springer, 2010),Motherhood and postnatal depression: Narratives of women and their partners, for Springer (with Carolyn Westall, Springer, 2011) and Health, illness and well-being: Perspectives and social determinants (with Rebecca Fanany and Glenda Verrinder, Oxford University Press, 2012). Pranee is also the General Editor of Cross-Cultural Perspectives on Infectious Diseases series, which will be published by Springer. Pranee has also published several method books. Her first method book is titled Qualitative research methods: A health focus (with Douglas Ezzy, Oxford University Press, 1999, reprinted in 2000, 2001, 2002, 2003, 2004); and the second edition of this book is titled Qualitative research methods (2005). This book is now in its third edition and she is the sole author of this edition (Liamputtong 2009). Other method books include: Health research in cyberspace: Methodological, practical and personal issues (Nova Science, 2006); Researching the vulnerable: A guide to sensitive research methods (Sage, 2007); Undertaking sensitive research: Managing boundaries, emotions and risk (with Virginia Dickson-Swift and Erica James, Cambridge University Press, 2008); and Knowing differently: Arts-based and collaborative research methods(with Jean Rumbold, Nova Science, 2008). She has recently published two books on the use of qualitative methodology in cross-cultural settings: Doing cross-cultural research: Methodological and practical issues (Springer, 2008) and Performing qualitative cross-cultural research (Cambridge University Press, 2010).Her most recent method book is Focus group methodology: Principles and practice (Sage, 2011).