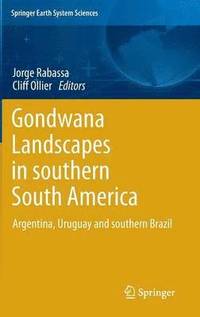 av Jorge Rabassa, Cliff Ollier
Inbunden Engelska, 2014-04-30
2329
Köp
Spara som favorit
Finns även som
Visa alla 2 format & utgåvor
This book presents extensive and new information on the geomorphology of cratonic areas of southern South America. It includes valuable data relating to recurrent controversies in general geomorphology beyond the boundaries of South America and reveals the great need to integrate many different aspects of geomorphology in regional studies. With the focus on ancient landscapes and especially on planation surfaces it addresses the question of what processes could form such huge features, and how they can be preserved for so long. Many of the papers include maps of planation surfaces or other geomorphic units. The volume brings together an up-to-date, state-of-the-art collection of information on South American geomorphology, and shows beyond doubt that geomorphology is on the same time scale as global tectonics, biological evolution and major climate change. Some of the papers describe ancient geomorphological features of areas that have never been studied or published before, while others describe regions which are totally unknown to the public. The scope of the book extends from tropical latitudes north of the Tropic of Capricorn, south to freezing Patagonia in the "roaring fifties", more than 3,500 km from north to south. Including over one thousand citations from geological and geomorphological literature, this volume will serve as a starting point for a whole new phase of studies of the fascinating landscape history of southern South America.
Visa hela texten

Jorge O. Rabassa has obtained his PhD in Geology at the Facultad de Ciencias Naturales y Museo, Universidad Nacional de La Plata. As of 1997, he teaches at the Facultad de Ciencias Economicas of the Universidad Nacional de la Patagonia-San Juan Bosco. He was a Director of the Postgraduate Field course on Geomorphology and Quaternary Geology of Tierra del Fuego from 2003 to 2006. He is a published author (journals, book chapters) and was the founder and head editor of the journal "Quaternary of South America & Antarctic Peninsula" from 1982 to 1999. He has a longstanding relationship with CADIC-CONICET, first acting as Investigador Independiente, then Investigador Principal and currently Investigador Superior. Cliff Ollier is a geologist, geomorphologist, soil scientist, emeritus professor and honorary research fellow, at the School of Earth and Environment, University of Western Australia. He was formerly at Australian National University, University of New England, Canberra University, University of Papua New Guinea, and University of Melbourne. Throughout his career he was a prolific author, with ten books (translated into four languages) and over 300 papers.

Introduction.- Some Concepts on Gondwana Landscapes: Long-term Landscape Evolution, Genesis, Distribution, and Age.- Some Principles in the Study of Planation Surfaces.- Planation Surfaces of the Gondwana Continents: Synthesis and Problems.- A Brief Review of the Development of Gondwana Landscape Studies in Africa, the Centre-piece of the Former Gondwana.- Modeling the Atmospheric Circulation and Climatic Conditions over Southern South America During the Late History of the Gondwana Super-Continent.- Gondwana Paleosurfaces in the State of Rio Grande Do Sul, Southern Brazil.- Ancient Landscapes of Uruguay.- A General Overview of Gondwana Landscapes in Argentina.- Planation Surfaces on the Parana Basaltic Plateau, Southern South America.- Geomorphology of Paleosurfaces in the Sierras De Comechingones, Central Pampean Ranges, Argentina.- Gondwana Glacial Paleolandscape, Diamictite Record of Carboniferous Valley Glaciation, and Pre-glacial Remnants of an Ancient Weathering Front in Northwestern Argentina.- Planation Surfaces of Central Western Argentina.- The Erosional Surfaces and Granitic Landscape in Ignimbrites of Sierra De Lihuel Calel, Province of La Pampa, Argentina.- Paleolandscapes of the Northern Patagonian Massif.- The Rhyolitic Plateau of the Marifil Formation (Jurassic): A Gondwana Paleosurface in the Southeastern Portion of the Northern Patagonia Massif.- Meso-Cenozoic Paleotopographies and Paleolandscapes in the Deseado Massif (Santa Cruz Province, Argentina).- Pseudokarst and Speleothems in the Chihuido Granite, Province Of Mendoza, Argentina.- The Exhumation of the Northern Patagonian Massif Gondwana Planation Surface Due to Uprising During the Oligocene.