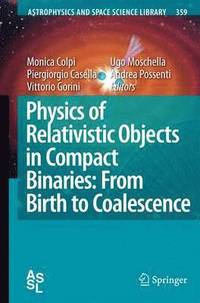 Physics of Relativistic Objects in Compact Binaries: from Birth to Coalescence

av Monica Colpi, Piergiorgio Casella, Vittorio Gorini, Ugo Moschella, Andrea Possenti
Häftad Engelska, 2014-11-06
1409
Köp
Spara som favorit
Skickas inom 10-15 vardagar.
Fri frakt inom Sverige för privatpersoner.
Finns även som
Visa alla 2 format & utgåvor
A very attractive feature of the theory of general relativity is that it is a perfectexampleofa"falsi?able"theory:notunableparameterispresentinthe theory and therefore even a single experiment incompatible with a prediction of the theory would immediately lead to its inevitable rejection, at least in the physical regime of application of the aforementioned experiment. This fact provides additional scienti?c value to one of the boldest and most fascinating achievements of the human intellect ever, and motivates a wealth of e?orts in designing and implementing tests aimed at the falsi?cation of the theory. The ?rst historical test on the theory has been the de?ection of light gr- ing the solar surface (Eddington 1919): the compatibility of the theory with this ?rst experiment together with its ability to explain the magnitude of the perihelion advance of Mercury contributed strongly to boost acceptance and worldwideknowledge.However,technologicallimitations preventedphysicists from setting up more constraining tests for several decades after the formu- tion of the theory. In fact, a relevant problem with experimental general r- ativity is that the predicted deviations from the Newtonian theory of gravity areverysmallwhentheexperimentsarecarriedoutinterrestriallaboratories.
Visa hela texten

Monica Colpi is professor in stellar astronomy and relativistic astrophysics at the Department of Physics of the University of Milano Bicocca, Italy. Born in 1957 in Rovereto (TN), she graduated in physics in 1982 and earned her Ph.D. degree in 1987 at the University of Milano. She has been a visiting scientist at Cornell University and postdoctoral fellow at the International School for Advanced Study (ISAS/SISSA) in Trieste. Since 1991 she has been a permanent staff member at the University of Milano. Monica Colpi is author of numerous scientific papers published in international journals, mainly in the fields of high energy astrophysics and compact objects. She has contributed relevant studies on the theory of accretion; the secular/dynamical/internal evolution of neutron stars in the Milky Way, from magnetars to pulsars and x-ray sources; the structure and stability of neutron stars; on boson stars; on black holes and neutron stars natal kicks ; and on the dynamics of massive black holes in merging galaxies and dense stellar systems, in the context of models for the formation of galactic structures. Monica Colpi is a member of the board of the Italian Society of General Relativity and Gravitational Physics and co-chairperson of the Society's Graduate School in Contemporary Relativity and Gravitational Physics which takes place biannually at the Alessandro Volta Center for Scientific Culture in Villa Olmo, Como, Italy.