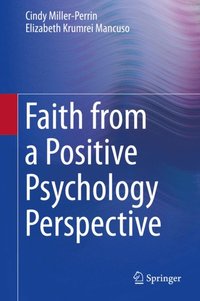 av Cindy Miller-Perrin, Elizabeth Krumrei Mancuso
E-bok (PDF - DRM), Engelska, 2014-10-01
939
Ladda ned
Spara som favorit
Laddas ned direkt
Läs i vår app för iPhone, iPad och Android
Finns även som
Visa alla 2 format & utgåvor
Prior to World War II, psychology had three main missions: make the lives of all people fulfilling; identify and enhance human excellence; and treat pathology. In the last half-century, however, psychology has largely focused on decreasing maladaptive emotions and behaviors, while ignoring optimal functioning (e.g., character strengths and virtues). Psychologists have traditionally focused on the treatment of mental illness from a perspective of repairing damaged habits, damaged drives, damaged childhoods, and damaged brains. In recent years, however, many psychological researchers and practitioners have attempted to re-focus the field away from the study of human weakness and damage toward the promotion of well-being among individuals, families, and communities. This new movement within the field of psychology has been labelled Positive Psychology and its goal is to identify and enhance the human strengths and virtues that make life worth living (&quoteThe good life&quote) and allow individuals and communities to thrive (Seligman & Csikszentmihalyi, 2000). Positive psychology is the scientific study of optimal experience. Several disciplines and sub disciplines that focus exclusively on issues associated with the field of positive psychology have emerged (APA's division of Psychological Study of Aesthetics, Creativity, and the Arts, APA's division of Psychology and Religion). In addition, several different professional journals and handbooks on positive psychology and healthy adjustment attest to the emergence of positive psychology as a recognized field. The number of positive psychology courses taught at both the graduate and undergraduate level nationally has increased dramatically in the past five years. One domain within the field of positive psychology is the study of religious faith as a human strength that has the potential to enhance the individuals' optimal existence and well-being. This book will highlight religious faith from a positive psychology perspective, examining the relationship between religious faith and well-being, including emotional and mental health. The authors review how religion and spirituality relate to optimal psychological functioning. The book will be written from a perspective of religious diversity incorporating international and cross-cultural references. It will specifically incorporate the empirical literature on the role of faith and cognition, faith and emotion, and faith and behavior. It focuses on how these topics relate to individuals' mental health, well-being, strength, and resilience, and incorporates information on how these faith concepts are relevant to relational functioning in the context of family interactions (e.g., marriage/parenting) and friendships. Finally, it takes a community perspective to examine research on the role of faith constructs for wellbeing among religious and other groups.
Visa hela texten