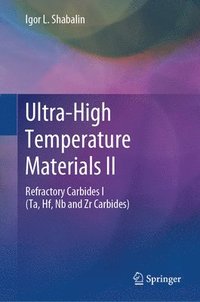 av Igor L Shabalin
Inbunden Engelska, 2019-05-09
2339
Köp
Spara som favorit
Skickas inom 5-8 vardagar.
Fri frakt inom Sverige för privatpersoner.
Kan levereras innan jul!
Finns även som
Visa alla 1 format & utgåvor
This exhaustive work in three volumes and over 1300 pages provides a thorough treatment of ultra-high temperature materials with melting points over 2500 DegreesC. The first volume focuses on Carbon and Refractory Metals, whilst the second and third are dedicated solely to Refractory compounds and the third to Refractory Alloys and Composites respectively. Topics included are physical (crystallographic, thermodynamic, thermo physical, electrical, optical, physico-mechanical, nuclear) and chemical (solid-state diffusion, interaction with chemical elements and compounds, interaction with gases, vapours and aqueous solutions) properties of the individual physico-chemical phases of carbon (graphite/graphene), refractory metals (W, Re, Os, Ta, Mo, Nb, Ir) and compounds (oxides, nitrides, carbides, borides, silicides) with melting points in this range. It will be of interest to researchers, engineers, postgraduate, graduate and undergraduate students alike. The reader is provided with the full qualitative and quantitative assessment for the materials, which could be applied in various engineering devices and environmental conditions at ultra-high temperatures, on the basis of the latest updates in the field of physics, chemistry, materials science and engineering.
Visa hela texten

In his professional career Igor L. Shabalin has got over 45 years experience in Ultra- High Temperature Materials Design, Science and Engineering. He was born in Russia, graduated in Technology of Less-Common Metals and received his M.Sc. and Ph.D. degrees from the Ural Polytechnic University (UPI), Yekaterinburg (former - Sverdlovsk), Russia. He has held academic positions at the UPI and was the founder of the Special Research Laboratory for Aerospace Industry (ONIL- 123). As head of the laboratory and member of several scientific and technological councils, he established collaboration between universities and industry by running a variety of R&D projects and was involved in the management of some world leading programmes in rocketry and spacecraft development in the USSR Ministry of Aerospace Industry (MOM). In 2003 Professor Igor L. Shabalin immigrated to the United Kingdom, and joined the University of Salford, Manchester, as a researcher in Materials in 2005. As he has developed his personal original approach to a special subclass of engineering materials - hetero-modulus composites and hybrids in ceramics, his research activity focuses mainly on high and ultra- high temperature ceramic composites with graphene-like (carbon and boron nitride) constituents. I. L. Shabalin has discovered in Russia in the 1980-90s and formulated later in the UK - mesoscopic temperature-pressure-dependent phenomenon in solid-state gas-exchange chemical reactions (surface processes) termed as "ridge effect". From 1971 up to date he has published about 270 scientific and technical papers and holds more than 40 patents. In 2014 I. L. Shabalin was awarded the title of Honorary Professor of the Department of High Temperature Materials (National Technical University of Ukraine), which was founded by Grigorii V. Samsonov, one of the world famous scientists of the 20th century in the field of physics and chemistry of refractory compounds.