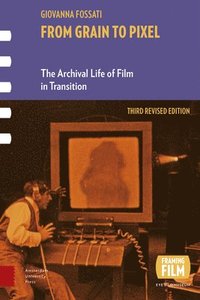 From Grain to Pixel

The Archival Life of Film in Transition, Third Revised Edition

av Dr Giovanna Fossati
Häftad Engelska, 2018-11-15
449
Köp
Spara som favorit
Skickas inom 5-8 vardagar.
Fri frakt inom Sverige för privatpersoner.
Finns även som
Visa alla 1 format & utgåvor
In From Grain to Pixel, Giovanna Fossati analyzes the transition from analog to digital film and its profound effects on filmmaking and film archiving. Reflecting on the theoretical conceptualization of the medium itself, Fossati poses significant questions about the status of physical film and the practice of its archival preservation, restoration, and presentation. From Grain to Pixel attempts to bridge the fields of film archiving and academic research by addressing the discourse on film's ontology and analyzing how different interpretations of what film is affect the role and practices of film archives. By proposing a novel theorization of film archival practice, Fossati aims to stimulate a renewed dialogue between film scholars and film archivists. Almost a decade after its first publication, this revised edition covers the latest developments in the field. Besides a new general introduction, a new conclusion, and extensive updates to each chapter, a novel theoretical framework and an additional case study have been included.
Visa hela texten

"Ten years after its first publication, the relevance of Fossati's *From Grain to Pixel* remains untouched and its third revised edition is a precious opportunity to revisit her theories and test them against the passing of time in an era of frantic technological changes." - Sabrina Negri, *Critical Inquiry* October 2019 "Giovanna Fossati's From Grain to Pixel has been an immensely valuable source for theories and practices of film digitization and restoration since its first publication in 2009. The new updated edition considers the changing requirements of this extremely dynamic, evolving field. Thanks to her double expertise as a film scholar and a curator, Fossati is able not only to provide deep insights into current approaches and advanced tools, but also to integrate them into her highly reflected theoretical framework thereby providing a state-of-the-art reference for research and teaching." - Barbara Flueckiger, Professor of Film Studies, University of Zurich "When From Grain to Pixel appeared it was the first motion picture study to fully engage with both archival practice and film theory, setting a high standard for the emerging area of film heritage studies. After nearly a decade, Giovanna Fossati's book still stands alone-fascinating, visionary, and provocative. Remarkably, the updates in this revised edition make it even more essential today." - Jane M. Gaines, Professor of Film, Columbia University - author of Pink-Slipped: What Happened to Women in the Early Film Industries? "Giovanna Fossati does more than simply give the most thoughtful, thorough and up-to-date account of the transformation in motion picture archiving over the last decades. She forces us to reconsider the nature of the moving image and prepare for a new era of communication and preservation." - Tom Gunning, Professor of Art History, Cinema and Media Studies, University of Chicago "Scholarly research on film and media is profoundly influenced by the way in which moving images are preserved and made accessible for scrutiny. This fact alone should make Giovanna Fossati's book mandatory reading for all graduate courses in the field." - Paolo Cherchi Usai, Senior Curator, Moving Image Department, George Eastman Museum

Giovanna Fossati is the chief curator of Eye Filmmuseum and professor of Film Heritage and Digital Film Culture at the University of Amsterdam.