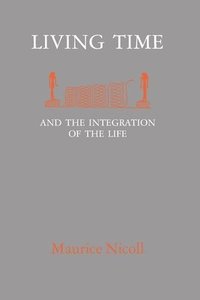 and the Integration of the Life

av Maurice Nicoll
Häftad Engelska, 2020-11-20
309
Köp
Spara som favorit
This book discusses consciousness, the perception of reality, the nature of eternity, the recurrence of life, the creation of NOW and the psychological systems we use to think about time.

Kenneth Walker wrote of this book: "This is one of those rare books which may have a lasting effect on the reader's thinking and give new meaning to the universe, to himself and to human life in general.

"Plato says that to become a spectator of Time is a cure for meanness of soul. We live in a narrow reality, partly conditioned by our form of perception and partly made by opinions that we have borrowed, to which our self- esteem is fastened. We fight for our opinions, not because we believe them but because they involve the ordinary feeling of oneself. Though we are continually being hurt owing to the narrowness of the reality in which we dwell, we blame life, and do not see the necessity of finding absolutely new standpoints. All ideas that have a transforming power change our sense of reality. They act like ferments. (.....) One reason for this is that the soul is turned towards the senses, while ideas are internally perceived as distinct from the inrush of outer things (....) In the following pages a number of quotations, notes, and observations have been brought together that refer in the main to the invisible side of things. How can we begin to understand the 'invisible'? The invisible nature of man and the corresponding invisible side of the world are here dealt with from the standpoint of dimensions (not taken mathematically) and also from the related standpoint of higher levels of consciousness. The question of a new understanding of Time, and of what the life means in the light of this understanding, is discussed. The possibility of a change in the time-sense, with a changed feeling of oneself, enters into this question. The meaning of eternity, about which we have really erroneous notions, comes under consideration, and finally the idea of the recurrence of the life is reviewed. It is necessary to begin with a general approach which takes into review some of our ordinary 'notions of things', as derived from the world that is shown to us by our senses. In this connection some reflections about the visible and invisible side of people must be first made."
Visa hela texten