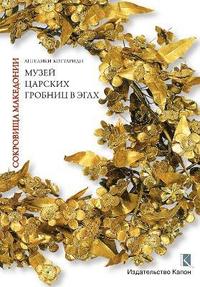 A Tour through the Museum of the Royal Tombs of Aigai

av Angeliki Kottaridi
Häftad Ryska, 2011-12-31
289
Köp
Spara som favorit
Distributed by University of Exeter Press. 154 colour illustrations. Russian language edition. The Museum of the Royal Tombs of Aigai was built especially to protect the monuments in the burial complex of King Philip II and to facilitate the public's access to their splendid murals, original large-scale paintings of the Classical period. In the form of an ancient tumulus and encasing the monuments, this Museum-Mausoleum is dedicated to the memory of illustrious historical figures familiar to all. This guide to the Museum of the Royal Tombs takes the reader step-by-step on a tour of this particularly spare and austere, yet atmospheric, exhibition of the treasures from these tombs. Impressive photographs accompany historical information and the presentation of the exhibits, transporting the visitor through space and time, in the footsteps of the remarkable flowering of culture in the land of Macedonia during Classical Antiquity.
Visa hela texten

Angeliki Kottaridi studied Classical, Prehistoric and Medieval Archaeology, History of Art, Ancient and Medieval Literature, Ethnology and Theatrology at the University of Cologne in Germany, where she earned her PhD. She has been a member of staff of the Greek Ministry of Culture since 1991, and since 2010 a Director of Prehistoric and Classical Antiquities, and of Byzantine Antiquities, for the Ministry. She is Director of four museums (Aigai, Pella, Archaeological and Byzantine of Veroia.) Principally a field archaeologist, she has produced many important research projects comprising excavations, as well as surface surveys, and also systematic studies, documentation and composite publications. She has participated in the organisations of many exhibitions in Greece and abroad, among which the most prominent is the exhibition 'From Herakles to Alexander the Great. Treasures from the royal capital of Macedon, a Hellenic Kingdon in an age of Democracy', organised at the Ashmolean Museum in Oxford in 2011. In 2008 she was awarded the Golden Cross of the Order of the Phoenix by the President of the Greek Democracy for her scientific work.