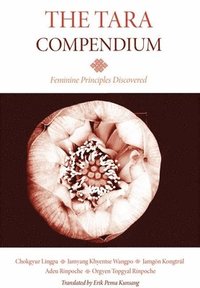 av Chokgyur Lingpa, Jamyang Khyentse Wangpo
Häftad Engelska, 2015-10-29
225
Köp
Spara som favorit
Specialorder (osäker tillgång). Skickas inom 11-20 vardagar.
Gratis frakt inom Sverige över 159 kr för privatpersoner.
Finns även som
Visa alla 1 format & utgåvor
Tara is an emanation of the mother of all the Buddhas of the three times. She carries out all their activities, dispelling the obstacles created through the eight or 16 types of fear. When anyone supplicates Tara, her response is swift. The activities resulting from her aspirations are extraordinary, and there is ample evidence of this, right up to the present day. The special quality of Tara is her extraordinary compassionate resolve to benefit all beings by removing whatever causes them to feel anxious or afraid. Tara is the heroine who swiftly carries out the activities of all the Buddhas. She is the very identity of enlightened activity -- beyond that which we can mentally imagine or fathom -- and has incredible virtues that surpass any thought. In short, through the symbolic meaning, you realize the true state of original wakefulness. This book gives the devotee the tools to apply the great energy and vitality of Tara in practice. Offering an overview of the many practices associated with this incredible Buddha, it gives of the gift of enlightenment into the palm of the readers' hand and affords the possibility to benefit others.
Visa hela texten

Chokgyur Lingpa was a great treasure revealer from the 19th century, renowned for his miraculous powers. Jamyang Khyentse Wangpo was one of the most brilliant minds of the late 19th century. Adeu Rinpoche was a great Tibetan Buddhist master. Erik Pema Kunsang is a respected translator and teacher. He has translated and edited over 50 volumes of Tibetan texts and oral teachings. His other projects include editing the "Dharma Dictionary," an ongoing electronic publication on the Web. He lives in Esbe, Denmark. Orgyen Topgyal Rinpoche is a modern Tibetan Vajrayana master known for his abilities to perform ceremonies. He lives in Bir, India.