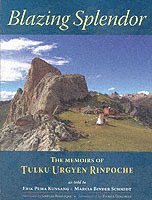 The Memoirs of Tulku Urgyen Rinpoche

av Tulku Urgyen Rinpoche
(1 röst)  |  Läs 1 recension
Häftad Engelska, 2005-08-01
449
Köp
Spara som favorit
Skickas inom 3-6 vardagar.
Gratis frakt inom Sverige över 159 kr för privatpersoner.
Blazing Splendor paints an intimate portrait of the lost culture of Old Tibet and of a remarkable man who inspired thousands. A memoir in the form of tales told by Rinpoche toward the end of his life, the book spans his lifetime -- a lifetime rich in adventures of both spirit and body. His reminiscences weave a rich tapestry of family history and also describe the lives of some of the most realized and genuine practitioners of Tibetan Buddhism.
Visa hela texten

Tulku Urgyen Rinpoche, deceased Contributor residences (city, state or country if outside the US or Canada): Tulku Urgyen Rinpoche (1920-1996) is recognized as one of the greatest 20th-century masters of Tibetan Buddhism and one of the first to bring the essential teachings of Buddhism beyond Tibet. Born into an illustrious family, he took as the core of his own practice the indivisibility of the three great traditions: the Dzogchen view of primordial purity and perfection, the Mahamudra view of mental non-doing, and the Middle Way view of holding no mental constructs. After fleeing Tibet shortly before the Dalai Lama, Tulku Urgyen Rinpoche devoted the rest of his life to trying to keep the spirit of the classical Tibetan spiritual system alive. Blazing Splendor is a translation of the name he was given by the head of the Kagyu Order of Tibetan Buddhism, the name referring to the qualities of a realized master. He was a teacher without peer, who transformed the lives of those who came to him from the world over, among them Joseph Goldstein, Sharon Salzberg, Tara Bennett-Goleman, and Lama Surya Das. Erik Pema Kunsang, who lives in Katmandu, Nepal, is one of the world's most gifted English interpreters of Tibetan. Since first trafveling to Nepal from his native Denmark at the age of 20, he has studied with and translated for more than 60 Tibetan masters. He is the compiler of a 3,000-page Tibetan dictionary of spiritual terms, "The Rangjung Yeshe Tibetan-English Dictionary of Buddhist Culture. Marcia Binder Schmidt, who lives in Katmandu, Nepal, and the U.S., was a long-time, close attendant to Tulku Urgyen Rinpoche. Previous publications include the compliation "Dzogchen Essentials," a comprehensive and accessible collection of essential Dzogchen instructions that combine study and practice. Sogyal Rinpoche is the author of "The Tibetan Book of Living and Dying" He lives primarily in France but travels extensively, giving lectures. Daniel Goleman is the author of "Emotional Intelligence" He lives in Massachusetts, U.S.