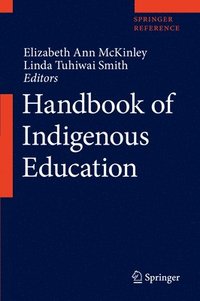 av Elizabeth Ann McKinley, Linda Tuhiwai Smith
Inbunden Engelska, 2019-03-29
5909
Köp
Spara som favorit
Skickas inom 5-8 vardagar.
Fri frakt inom Sverige för privatpersoner.
Finns även som
Visa alla 1 format & utgåvor
This book is a state-of-the-art reference work that defines and frames the state of thinking, research and practice in indigenous education. The book provides an authoritative overview of the subject in one text. The work sits within the context of The UN Declaration of the Rights of Indigenous Peoples that states "Indigenous peoples have the right to the dignity and diversity of their cultures, traditions, histories and aspirations which shall be appropriately reflected in education" (Article 14.1). Twenty-five years ago a book of this nature would have been largely written by non-Indigenous researchers about Indigenous people and education. Today Indigenous researchers can write this work about and for themselves and others. The book is comprehensive in its coverage. Authors are drawn from various individual jurisdictions that have significant indigenous populations where the issues include language, culture and identity, and indigenous people's participation in society. It brings together multiple streams of research by 'new' indigenous voices. The book also brings together a wide range of educational topics including early childhood education, educational governance, teacher education, curriculum, pedagogy, educational psychology, etc. The focus of one body of work on Indigenous education is a welcome enhancement to the pursuit of the field of Indigenous educational aspirations and development.
Visa hela texten

Professor Elizabeth Ann McKinley is a Professor of Indigenous Education at the University of Melbourne. She is known for her work exploring the interaction between science, education, and Indigenous culture. She has a strong research and publication record in the field of Indigenous science education, curriculum, and the capability of mainstream education systems to meet the complex challenges of transforming educational outcomes for Indigenous and other students from underserved communities. Before moving to Melbourne in 2014, she was a Professor of Maori Education and Director of the Starpath Project for Tertiary Participation and Success at the University of Auckland. She is also well known for her capacity building and mentoring work with doctoral students and early career researchers. She has served on a number of panels and committees that have influenced public policy, including the Ministerial Cross Sector Forum on Raising Achievement, and that have assessed research proposals for funding, including New Zealand's Endeavour Fund Impact Panel and Science Challenges Review. She has also served on several panels for the New Zealand Universities Academic Audit Unit. She has received a New Zealand Honour as an Officer to the New Zealand Order of Merit. Professor Linda Tuhiwai Smith is Professor of Maori and Indigenous Studies at the University of Waikato. Professor Smith has a distinguished career as a researcher and educator who has led many of the developments in Maori and Indigenous research, establishing research centers, building networks, and mentoring researchers. She is known for her work on decolonizing and Indigenous Methodologies and Kaupapa Maori Research. Professor Smith was joint founding Director of Nga Pae o Te Maramatanga, the Maori Centre of Research Excellence, and former President of the New Zealand Association for Research in Education. Professor Smith is a member of the Waitangi Tribunal. She has received a number of awards including a New Zealand Honor as Companion to the New Zealand Order of Merit. She is a fellow of the Royal Society of New Zealand and of the American Educational Research Association. In 2017, she received the Prime Minister's Lifetime Achievement Award in Education. In 2018, she recently received an Honorary Doctorate of Laws from the University of Winnipeg, Canada, and the Te Puawaitanga Research Excellence Award, the highest honor from the Royal Society of New Zealand for research in Maori and Indigenous knowledge.