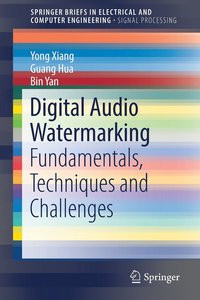 av Yong Xiang, Guang Hua, Bin Yan
Häftad Engelska, 2017-03-23
709
Köp
Spara som favorit
Skickas inom 10-15 vardagar.
Fri frakt inom Sverige för privatpersoner.
Kan levereras innan jul!
Finns även som
Visa alla 1 format & utgåvor
This book offers comprehensive coverage on the most important aspects of audio watermarking, from classic techniques to the latest advances, from commonly investigated topics to emerging research subdomains, and from the research and development achievements to date, to current limitations, challenges, and future directions. It also addresses key topics such as reversible audio watermarking, audio watermarking with encryption, and imperceptibility control methods. The book sets itself apart from the existing literature in three main ways. Firstly, it not only reviews classical categories of audio watermarking techniques, but also provides detailed descriptions, analysis and experimental results of the latest work in each category. Secondly, it highlights the emerging research topic of reversible audio watermarking, including recent research trends, unique features, and the potentials of this subdomain. Lastly, the joint consideration of audio watermarking and encryption is also reviewed. With the help of this concept, more secure audio watermarking systems can be developed, which meet the requirements for security and privacy in cloud-based networks and systems. Accordingly, the book serves as a tutorial suitable for readers with a general knowledge of audio signal processing as well as experts in related areas, helping these readers understand the basic principles and the latest advances, concepts and applications of audio watermarking.
Visa hela texten

Yong Xiang received the B.Eng. and M.E. degrees from the University of Electronic Science and Technology of China, Chengdu, China, in 1983 and 1989, respectively. In 2003, he received the Ph.D. degree from The University of Melbourne, Australia. He was with the Southwest Institute of Electronic Equipment of China, Chengdu, from 1983 to 1986. In 1989, he joined the University of Electronic Science and Technology of China, where he was a Lecturer from 1989 to 1992 and an Associate Professor from 1992 to 1997. He was a Senior Communications Engineer with Bandspeed Inc., Melbourne, Australia, from 2000 to 2002. He is currently a Professor with the School of Information Technology at Deakin University, Melbourne, Australia. He is also the Associate Head of School (Research) and the Director of the Artificial Intelligence and Data Analytics Research Cluster. His research interests include information security and privacy, multimedia (speech/image/video) processing, wireless sensor networks, massive MIMO, and biomedical signal processing. He has authored over 130 refereed journal and conference papers in these areas. He is an Associate Editor of IEEE Signal Processing Letters and IEEE Access. He has served as the Program Chair, TPC Chair, Symposium Chair, and Session Chair for a number of international conferences. Guang Hua received the B.E. degree in communication engineering from Wuhan University, China, in 2009, and the M.Sc. degree in signal processing and the Ph.D. degree in information engineering from Nanyang Technological University, Singapore, in 2010 and 2014, respectively. From 2013 to 2015, he was a Research Scientist with the Department of Cyber Security and Intelligence, Institute for Info comm Research, Singapore. From 2015 to 2017, he was a Research Fellow in the School of Electrical and Electronic Engineering, Nanyang Technological University. He is currently with the School of Electronic Information and Communications, Huazhong University of Science and Technology, China. He has a strong background in digital signal processing, especially for the processing of acoustic, radar, and multimedia signals. His current research interests are in the area of multimedia forensics and data hiding. He has first authored over ten highly ranked IEEE journal and conference papers. He is a Guest Editor of IEEE Access Special Section on Latest Advances and Emerging Applications of Data Hiding in 2016. Dr. Hua also holds a Singapore patent. Bin Yan received the B.Sc. degree from Qingdao University, Qingdao, China in 1996 and the M.E. and Ph.D. degrees from Harbin Institute of Technology, Harbin, China in 2002 and 2007 respectively. He was an electronic engineer in GOMA company group, Qingdao, China, from 1996 to 1999. He is now an Associate Professor with the College of Electronics, Communication and Physics at Shandong University of Science and Technology, Qingdao, China. His research interests include multimedia security, digital watermarking, signal processing for wireless communication, and image processing.