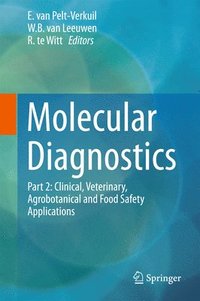 av E Van Pelt-Verkuil, W B Van Leeuwen, R Te Witt
Inbunden Engelska, 2017-08-07
1519
Köp
Spara som favorit
Skickas inom 3-6 vardagar.
Gratis frakt inom Sverige över 159 kr för privatpersoner.
Finns även som
Visa alla 2 format & utgåvor
This two volume book set provides a comprehensive and practical overview of the state-of-the-art molecular biological diagnostic strategies that are currently used in a wide variety of disciplines. The volumes cover: Clinical microbiology and virology Clinical chemistry Pathology Veterinary medicine Plant Pathology Food safety The two volumes are written by experts in their respective fields, who have, together with the editors, combined years of experience in the development, application and quality control of molecular diagnostic methods. The first book is devoted to the theory and backgrounds of molecular techniques, amplification technology, next generation sequencing and bioinformatics for molecular laboratory diagnostics. As a fundament of reliable molecular diagnostic assays, the quality control required for validation, implementation and performance of molecular diagnostic assays is extensively discussed. The second book highlights the applications of these methods in the various diagnostic laboratories. These two full-colour well-illustrated volumes are particularly valuable for students, clinicians, scientists and other professionals who are interested in (designing) molecular diagnostic tests and for those who wish to expand their knowledge on the current molecular biological revolution. The extensive information in both books highlights the current trend of the integration of multiple (clinical) disciplines into one universal molecular laboratory.
Visa hela texten

E.van Pelt-Verkuil Elizabeth van Pelt-Verkuil, born in Rotterdam, The Netherlands has been involved in the development of new techniques in both molecular - and cell biology for more than 40 years. From the first PCRs in 1985 up to now, Elizabeth participated in its development and the applicability in molecular diagnostics. First in pathology, later combined with microbiology. In the meantime her focus changed from research to diagnostics. After graduation in cell biology and biochemistry at University Leiden in 1975, Elizabeth got her PhD on (experimental) developmental biology in 1979, followed by a post-doc position on experimental arteriosclerosis. From 1982 onward, she was a lecturer and applied scientist at the University of Applied Science Leiden for both graduate and post-graduate education in i.e. molecular diagnostics. Elizabeth organised her first theoretical and practical course on PCR and in situ hybridisation for post-graduates in 1987. Elizabeth was founder of the Centre of Bioscience and Diagnostics in 2001; a department of the before mentioned institute, specialised in post-graduate education. Elizabeth organised and participated in many courses and in-company-trainings on PCR and molecular diagnostics. During a 5 -year period from 2011 onwards at the Professorship Innovative Molecular Diagnostics at the University of Applied Science Leiden, Elizabeth focused on the implementation and embedding of new laboratory developed qPCR tests for the detection and identification of viral pathogens, including all aspects of quality control. Since 2016 Elizabeth is owner of and consultant at "Quality and Innovations in Molecular Diagnostics", a company which is specialised in implementation, quality control and education in the field of molecular diagnostics. Elizabeth van Pelt-Verkuil is a member of the Dutch Society of Medical Microbiology (NVMM) and participates in the Study group of Molecular Diagnostics of Infectious Diseases (WMDI). Elizabeth van Pelt-Verkuil is editor/author of 2 Dutch books on Molecular Diagnostics and a textbook on PCR. E. van Pelt-Verkuil et.al. Moleculaire Diagnostiek (editors/author) (1e Ed; in Dutch) 2001. Bohn Stavleu van Loghum; ISBN9-789031331031 E. van Pelt-Verkuil et.al. (author) Principles and technical aspects of PCR amplification (2008). Springer ISBN 9 781402062407 E. van Pelt-Verkuil and W.B. van Leeuwen, Moleculaire Diagnostiek (editors/author) (2nd Ed; in Dutch) 2013. Syntax media; ISBN 9789077423950 W.B. van Leeuwen Willem van Leeuwen was born in Rotterdam, The Netherlands. He studied Microbiology on the University of Applied Science in Rotterdam (BSc in 1975) and specialized in Medical Biology on the University of Applied Science in Etten-Leur, The Netherlands (MSc in 1982). In 2002 he wrote his thesis "Binary typing of Staphylococcus aureus" and became a specialist in Medical Molecular Microbiology at the Erasmus Medical Center Rotterdam, department of Medical Microbiology & Infectious Diseases. The population structure analysis and host-pathogen interaction of Staphylococcus aureus were the subjects of study during the post-doctoral phase in this department. From august 2002 through 2007 he is responsible for the unit Molecular Diagnostics (validation and implementation of new diagnostic platforms). In February 2007 he was invited to become lecturer Innovative Molecular Diagnostics at the University of Applied Science of Leiden, the Netherlands and became manager of the research center, "Toplab" in Leiden. In September 2013, he was appointed as professor at the University of Applied Science Leiden. Since 1996, Willem is a member of the European Society of Clinical Microbiology and Infectious Diseases (ESCMID), Dutch Society of Medical Microbiology (NVMM) and the Study group of Molecular Diagnostics of Infectious Diseases (WMDI). Willem is involved in the post-graduate course "Molecular Diagnostics" at the Erasmus Universit