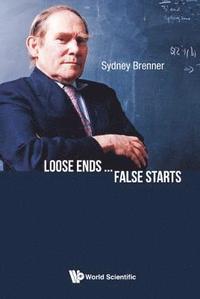 av Sydney Brenner
Häftad Engelska, 2019-09-18
289
Köp
Spara som favorit
Skickas inom 10-15 vardagar.
Fri frakt inom Sverige för privatpersoner.
Finns även som
Visa alla 3 format & utgåvor
Sydney Brenner was born in South Africa and educated at the University of Witwatersrand, Johannesburg (Medicine and Science). He then moved to Oxford and received a D.Phil in 1952, before joining the MRC Unit in the Cavendish Laboratory in Cambridge in 1956. His various accomplishments include serving as the Director of MRC Laboratory of Molecular Biology in Cambridge, founding the Molecular Science Institute in Berkeley, holding the position of Distinguished Professor at the Salk Institute, La Jolla. And during his last years, Sydney Brenner played a key role in shaping research and development in the biomedical sector in Singapore as A*Star Senior Fellow.He was one of the greatest biologists of the 20th century and was awarded the Nobel Prize in 2002 for his pioneering work in the field of molecular biology. He was also known for his boundless curiosity, sharp intellect and courage to speak with clarity and characteristic wit as evident in this delightful book which is a compilation of the columns that he wrote for Current Biology in the late '90s.
Visa hela texten

Long-awaited, the complete edition of Sydney Brenner's Loose Ends ... False Starts will enchant all biologists. -- Timothy "Director of Research, Emeritus Professor of Medicine, University of Cambridge" Loose Ends ... False Starts captures Sydney's unique combination of wit, irreverence, and unparalleled knowledge of science and medicine: A genius at play. -- Sir Keith Peters GBE FRCP FRS "Emeritus Regius Professor of Physic, University of Cambridge" No one who met Sydney Brenner remained untouched. His intuitive and visionary scientific insight was exceptional, but what added to the lasting impressions was his sense of humor. -- Erling "Royal Swedish Academy of Sciences" Not only compulsory reading, but also compelling and fun. -- Sir Philip Campbell "Former Editor-in-Chief, Nature" Sydney Brenner had a very sharp mind and his essays from the 90s are enjoyable and thought-provoking often staged in Cambridge, figuring many of the main players of molecular biology. -- Sten Grillner "Former Chair of the Nobel Assembly at the Karolinska Institute, Stockholm" These short essays by 'Uncle Syd' capture Sydney Brenner's wonderful wit and wisdom. My favorite is 'Francisco Crick in Paradiso'. -- Terrence Sejnowski "Francis Crick Chair, Salk Institute for Biological Studies" This book gives you the opportunity to know Sydney Brenner, a unique and passionate individual with a voice always searching for the truth and telling us, without any excuses, about the essence and the fallacies in scientific discoveries. -- Torsten Wiesel "Nobel Prize in Physiology or Medicine 1981" Uncle Syd's Loose Ends ... False Starts is, for all of us, scientists or not and specially for the younger generation, like a piece of jewelry, a string of pearls, born from a genius brain about science, scientists and humanity, in general. -- Jean-Pierre Changeux "College de France and Institut Pasteur"