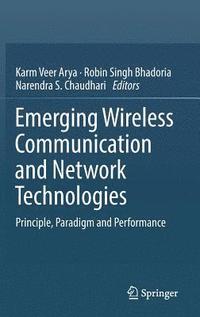 Prof. Karm Veer Arya received his PhD from the Indian Institute of Technology in Kanpur (IITK), India and his Master's degree from the Indian Institute of Science (IISc) in Bangalore, India. His research areas include Image Processing, Biometrics, Information Security, and Wireless Ad-hoc Networks. He is currently working as a Professor at the Institute of Engineering & Technology (IET), Lucknow, and as Dean of PG Studies and Research, AKTU Lucknow, Uttar Pradesh, India. He has published more than 150 papers in international journals and conferences and supervised 6 Ph.D. scholars and more than 100 Master's students. In addition, he has completed several funded research projects. Robin Singh Bhadoria has worked in various fields, including Data Mining, Cloud Computing, Service Oriented Architectures, Wireless Sensor Networks, etc. He has published more than 60 research articles in the form of book chapters, conference and journal papers, and has released three edited books. Most recently, he completed his Ph.D. in the discipline of Computer Science & Engineering at the Indian Institute of Technology Indore (IITI), Madhya Pradesh, India. Prof Narendra S. Chaudhari has more than 35 years of academic and research experience. He was Professor of Computer Science in the Ministry of Defense (Govt. of India) M.Sc. DRDO Program from 1990 to 2001 and has been Professor of Computer Science and Engineering at the Indian Institute of Technology (IIT) Indore since 2009. He has also been a member of the Computer Engineering faculty at Nanyang Technological University (NTU), Singapore since 2002 to 2009. He has also been the Director of Visvesvaraya National Institute of Technology (VNIT), Nagpur, Maharashtra State, India since 2013. His research contributions are in the areas of algorithms and graph theory, network security and mobile computing, novel neural network models, context free grammar parsing, and optimization. He has authored more than three hundred forty research publications.