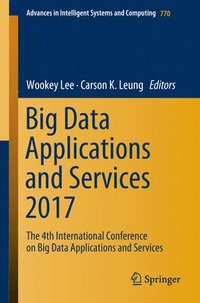 The 4th International Conference on Big Data Applications and Services

Wookey Lee received the B.S., M.S., and Ph.D. from Seoul National University, Korea, and the M.S.E. degree from Carnegie Mellon University, USA. He currently is a Professor in Inha University, Korea. He has served as PC member and chair for many conferences such as CIKM, IEEE DEST, DASFAA, ICDE, VLDB, etc, and also as executive committee of IEEE TCDE. He won the best paper awards in IEEE DESC, ACM BigDas, KORMS and KIISE. He is the EIC of Journal of Information Technology and Architecture and the Big Data Service Journal, and an associate editor for WWW Journal. His research interests include Graph DB, Patent Information, Privacy, and Data Warehousing. Carson K. Leung received his B.Sc.(Hons.), M.Sc., and Ph.D. from The University of British Columbia, Vancouver, Canada. He is currently a Professor at the University of Manitoba, Canada. He is also a Senior Member of the ACM and the IEEE. He has published more than 190 papers on the topics of his research interests, which include big data mining and analysis (including data analytics, data science & business intelligence solutions), databases, data management, data warehousing, data visualization and visual analytics, health and bioinformatics, Web technology and services, as well as social computing and social network analysis. He has also served as a PC member and an Organizing Committee member of many conferences such as ACM CIKM, ACM SIGMOD, IIEEE/ACM ASONAM, EEE DSAA, and IEEE ICDM.