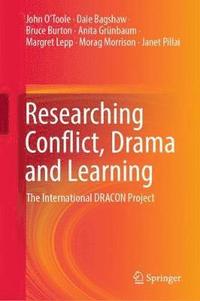 av John O'Toole, Dale Bagshaw, Bruce Burton, Anita Grunbaum, Margret Lepp
Inbunden Engelska, 2019-03-05
1176
Köp
Spara som favorit
Finns även som
Visa alla 1 format & utgåvor
This book offers a comprehensive and critical guide to research and practice in the field of arts education and conflict management. The DRACON project explores the relationship between drama and conflict transformation. This international, interdisciplinary and comparative action research project, begun in 1996, is aimed at improving conflict management and transformation among adolescent school students using the medium of educational drama. The book reports on the underpinning principles, and on action research practice in Malaysia, Sweden and Australia. The strategies and techniques, which were revolutionary when first introduced, are now tried and tested. The book chronicles the history, successes, opportunities and challenges of the original 10-year project, and brings the story up to date by highlighting some of its many legacies and resulting influences around the world. This book will benefit researchers, academics and graduate students in Education, the Social Sciences, Dispute Resolution and the Performing Arts.
Visa hela texten

John O'Toole is a former Professor of Drama at Griffith University and Arts Education at the University of Melbourne. He has practised, taught, researched and published internationally on drama for over forty years, with all ages. In 2014 he was awarded the Order of Australia for drama education. Dale Bagshaw, former Director of the Centre for Peace, Conflict and Mediation, now adjunct Associate Professor at the School of Psychology, Social Work and Social Policy, University of South Australia, has taught, researched and published internationally on mediation and dispute resolution. Bruce Burton is a Professor Emeritus at Griffith University with an international reputation in Drama and Applied Theatre, and is the author of ten books. He has been awarded six Australian Research Council grants and a European Union Erasmus+ grant, and has received a national university teaching award. Anita Grunbaum was founder and Head of Education and Drama at Vasterbergs Folk High School, Sweden from 1974 to 2002. She was editor of the journal DramaForum from 2004 to 2016 and is currently an independent drama consultant. Her book publications focus on drama among teenagers in school. Margret Lepp is a Professor of Caring Sciences and Care Pedagogics at the University of Gothenburg, Sweden, with an international reputation in drama, nursing education and other healthcare professions. She has published numerous original articles, books and book chapters. Morag Morrison-Helme is a Lecturer in Arts Education at the Faculty of Education, University of Cambridge. Morag's teaching and research interests focus on the use of Applied Theatre practices to support creative pedagogy and democratic learning. Janet Pillai works as an independent drama consultant and resource person. She is a pioneering children's theatre director and founder of Arts-ED Penang. Her areas of specialisation and publications are in the areas of creative pedagogy, arts and heritage education, and cultural mapping.