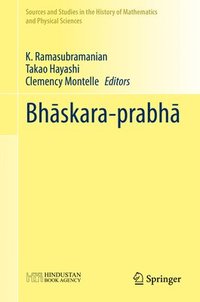 av K Ramasubramanian, Takao Hayashi, Clemency Montelle
Inbunden Engelska, 2019-05-29
1189
Köp
Spara som favorit
Skickas inom 3-6 vardagar.
Fri frakt inom Sverige för privatpersoner.
Finns även som
Visa alla 1 format & utgåvor
This book covers the works of Bhaskara, in particular, his monumental treatise on astronomy, the Siddhantasiromani, his astronomical handbook, the Karanakutuhala, and his two mathematical treatises, the Lilavati and the Bijaganita, on arithmetic and algebra, respectively. It is a collection of selected papers presented at Bhaskara 900, an international conference commemorate the 900th birth anniversary of the great Indian mathematician Bhaskaracarya. Bhaskara-prabha, the radiance of Bhaskara, presents the Indian mathematical tradition and the place of Bhaskara in it. The aim of this book is to instill a sense of pride in younger generations of one of their most celebrated thinkers, by sketching some details of his mathematical achievements and capturing their imagination through his poetic flair. It is intended to raise a greater awareness among students and teachers of India's rich mathematical heritage.
Visa hela texten

"The Bhaskaraprabha with its various scholarly contributions will surely be a welcome and useful contribution to any library." (Sita Sundar Ram, zbMATH 1426.01006, 2020) "Students of the mathematics of India will, of course, find much here that is useful, and at least some of the articles will interest more general readers as well." (Fernando Q. Gouvea, MAA Reviews, October 13, 2019)

K. RAMASUBRAMANIAN is a professor at the Cell for the Indian Science and Technology in Sanskrit, Department of Humanities and Social Sciences, Indian Institute of Technology Bombay, India. He holds a doctorate degree in Theoretical Physics, a master's degree in Sanskrit, and a bachelor's degree in Engineering-a weird but formidable combination of subjects to do multi-disciplinary research. He was honoured with the coveted title "Vidvat Pravara" by the Shankaracharya of Sri Sringeri Sharada Peetham, Karnataka, India, for completing a rigorous course in Advaita Vedanta (a 14-semester program), in 2003. He is one of the authors who prepared detailed explanatory notes of the celebrated works Ganita-yuktibhasa (rationales in mathematical astronomy), Tantrasangraha and Karana-paddhati, which bring out the seminal contributions of the Kerala School of Astronomers and Mathematicians. He was conferred the prestigious award of the Maharsi Badarayana Vyas Samman by the then President of India, in 2008, and the R. C. Gupta Endowment Lecture Award by the National Academy of Sciences India, in 2010. He is a recipient of several other awards and coveted titles as well. From 2013, he serves as an elected council member of the International Union of History and Philosophy of Science and Technology. He is also a member of various other national and international bodies. TAKAO HAYASHI is an emeritus professor of history of science from Doshisha University, Japan. He worked on the Bakhshali manuscript to obtain his PhD from Brown University in 1985. He focused on Indian mathematics history, and specifically the Bakhshali manuscript, the oldest surviving Indian text on mathematics. He was a fellow of the Japan Society for the Promotion of Science. He is a recipient of the Salomon Reinach Foundation Prize from French Institute (2001), Publication Prize from Mathematical Society of Japan (2005), and Kuwabara Prize from the History of Mathematics Society of Japan (2005). He is a member of American Mathematics Society, the Indian Society for History of Mathematics, the History of Science Society of Japan, and the Japanese Association of Indian and Buddhist Studies. CLEMENCY MONTELLE is an associate professor at the Department of Mathematics and Statistics, University of Canterbury, New Zealand. She earned her PhD in the History of Mathematics from Brown University, in 2005. She is the joint director of History of Mathematical Sciences in India (HAMSI), a research hub devoted to the study of the astral sciences on the Indian subcontinent. Her research interest lies in the history of mathematics.