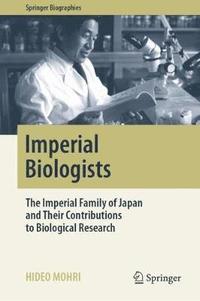 The Imperial Family of Japan and Their Contributions to Biological Research

av Hideo Mohri, Naoto Ueno
Inbunden Engelska, 2019-04-02
349
Köp
Spara som favorit
Finns även som
Visa alla 1 format & utgåvor
This book sheds light on a little-known aspect of the Imperial family of Japan: For three generations, members of the family have devoted themselves to biological research. Emperor Showa (Hirohito) was an expert on hydrozoans and slime molds. His son, Emperor Akihito, is an ichthyologist specializing in gobioid fishes, and his research is highly respected in the field. Prince Akishino, Emperor Akihito's son, is known for his research on giant catfish and the domestication of fowl, while Prince Hitachi, Emperor Akihito's brother, has conducted research on cancer in animals. The book shows how they became interested in biology, how seriously they were committed to their research, what their main scientific contributions are, and how their achievements are valued by experts at home and abroad. To commemorate the 60-year reign of Emperor Showa and his longtime devotion to biology, the International Prize for Biology was founded in 1985. The prize seeks to recognize and encourage researches in basic biology. A list of winners and a summary of their research are presented in the last part of the book. The author, an eminent biologist who has given lectures to the Imperial Family, explains their research and tells the fascinating story of biology and the Imperial Family of Japan. The book is a valuable resource, not only for biology students and researchers, but also for historians and anyone interested in science and the Royal and Imperial families.
Visa hela texten

Hideo Mohri D.Sc., Emeritus Professor of the University of Tokyo and Former Director-General of the National Institute for Basic Biology

Preface Introduction Monarchs and SciencesMonarchs' Involvement in SciencesImperial Family Members' Contributions to Sciences and Culture in Japan Chapter 1 His Majesty, the Emperor Showa (Hirohito)-The first of a family of biologists inherited for three generations. He was a specialist in hydrozoans and slime molds and discovered about 200 new species of various Phyla. He published 9 original papers including two voluminous monographs on hydrozoans and was involved in the publication of over 20 books on marine organisms in the Sagami Bay and on plants in Nasu and Suzaki. 1-1 The Personal History of the Emperor Showa1-2 Days learning at Study, Crown Prince's Palace1-3 Days Serving as the Crown Regent and Opening the Imperial Biological Laboratory1-4 Why Did the Emperor Find His Research Target in Biology?1-5 The Emperor Showa Setting His Heart on Devoting Himself to the Study of Taxonomy1-6 What is Hydrozoa?1-7 Fruitful Encounter with Myxomycetes and Kumagusu Minakata1-8 Biological Laboratory of the Imperial Household1-9 Collecting Marine Organisms in Sagami Bay, a worldwide Repository1-10 History of the Imperial Collecting Boats1-11 Animals and Plants Living in the Imperial Palace and National Tree-planting Ceremony1-12 Botanical Collection at Nasu and Suzaki1-13 Revisit to Europe and First Visit to U.S. by the Emperor Showa1-14 Emperor Showa's Later Life1-15 Achievements of the Emperor Showa1-16 Evaluation of the Emperor Showa's Achievements1-17 Involvement in Biology of the Empress Kojun and the Former Imperial Princesses Chapter 2 The Current Emperor (Akihito) and Prince Hitachi-The second-generation biologists. The current Emperor Akihito, the first son of Hirohito, has interested in gobies and has classified them both morphologically using characters which he examined and molecular phylogenetically using DNA. The Prince Hitachi, the second son of Hirohito, has also studied biology and contributed to the development of comparative oncology. 2-1 The Imperial Palace and Villas2-2 The Imperial Family and Horses2-3 The Zoological Institute and Botanical Institute, Faculty of Science, the University of Tokyo2-4 The Personal History of the Present Emperor, Akihito2-5 The Period from the Marriage of the Crown Prince to the Era of Heisei2-6 Why Did the Emperor Akihito Selectively Adopted Gobies?2-7 The Fish Laboratory, the Crown Prince's Palace and the Current Biological Laboratory of the Imperial Household2-8 The lineage of Japanese Ichthyology and Tokyo University of Fisheries2-9 The Emperor Akihito as One of Researchers2-10 Local Salmon (Oncorhynchus nerka kawamurae), Bluegill (Lepomis macrochirus), Tilapia (Oreochromis niloticus) and Coelacanth (Coelacanthiformes)2-11 The Emperor Akihito's Achievements2-12 Highlights and Evaluation of the Emperor Akihito's Achievements2-13 The Emperor Akihito's Great Knowledge of Japanese History of Science2-14 Biota of the Imperial Palace2-15 The Personal History of the Prince Hitachi and His Research on Cancer Chapter 3 The Prince Akishino and the Former Princess Sayako Kuroda-The third -generation biologists. The Prince Akishino, the second son of Akihito, hasbeen pursuing the origin of domestication of chicken from the perspectives of DNA analyses and folkloristics. He has also interested in giant catfish. Sayako Kuroda is a bird-watcher and is working at the Yamashina Institute for Ornithology. 3-1 The Personal History of the Prince Akishino3-2 The Prince Akishino's Achievements - Researches on catfish and molecular phylogenetics of domestic fowl3-3 Taxonomic and Phylogenetic Researches3-4 "Biostory", the Journal of the Society of Biosophia Studies3-5 The Prince Akishino as an Honorary President of International Biology Olympiad3-6 Sayako Kuroda as a Researcher of Yamashina Institute for Ornithology3-7 The Crown Prince's Researches Chapter 4 The International Prize for Biology-The Prize founded in commemoration of longtime devotion of the Emperor Showa and the