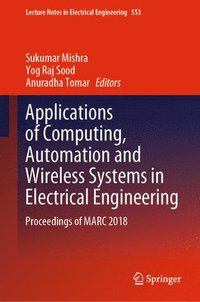 Applications of Computing, Automation and Wireless Systems in Electrical Engineering

Sukumar Mishra is a Professor at the Department of Electrical Engineering, Indian Institute of Technology, Delhi. He is a recipient of the INSA medal for young scientists, the INAE Young Engineer Award, and the INAE Silver Jubilee Young Engineer Award. In 2009, at the age of 38 he became the youngest fellow in the Electrical Engineering section of the INAE. He is also a fellow of the IET UK, IETE India and IE India. He is currently the NTPC Chair Professor as well as the Vice Chair of the Intelligent System Subcommittee of the IEEE Power and Energy Society. He is actively involved in academic and industrial research and development collaborations, and has been involved in numerous research projects and industrial consultancies. He has 25 years' professional experience and is currently serving as an Editor for the IEEE Transactions on Smart Grid and an Associate Editor for the journal IET Generation, Transmission & Distribution. Yog Raj Sood is affiliated with the Department of Electrical Engineering, National Institute of Technology, Hamirpur, where he is currently working as a Professor. He has authored or co-authored several national and international publications and also acted as a reviewer for respected professional journals. He is actively associated with various societies and academies around the world, and has received several awards for his contributions to the scientific community. His major research interests are in the deregulated power sector and congestion management. Anuradha Tomar is an Associate Professor at the Electrical Engineering Department, JSS Academy of Technical Education, Noida, India. She has authored or co-authored 68 research/review papers in various conference proceedings, national and international journals. Her research interests include photovoltaic systems, microgrids, energy conservation, and automation. In addition to having filed seven Indian patents, she is a member of the ISTE, IETE, IEI and IAENG.