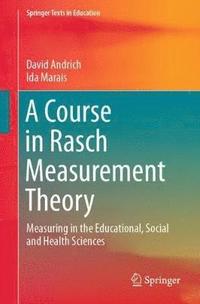 A Course in Rasch Measurement Theory

Measuring in the Educational, Social and Health Sciences

av David Andrich, Ida Marais
Häftad Engelska, 2019-07-24
749
Köp
Spara som favorit
Skickas inom 5-8 vardagar.
Fri frakt inom Sverige för privatpersoner.
Finns även som
Visa alla 1 format & utgåvor
This book applies Rasch measurement theory to the fields of education, psychology, sociology, marketing and health outcomes in order to measure various social constructs. The chief focus is on first principles of both the theory and its applications. Because software is readily available to carry out analyses of real data, numerous small examples are provided in the book. The software used in these examples, and which is helpful in working through the text, is RUMM2030 (Rasch unidimensional models for measurement). The book's main goals are to equip researchers with the confidence they need in order to be in control of the analysis and interpretation of data, and to make professional rather than primarily statistical decisions mechanically. Because statistical principles are necessarily involved, reviews of the requisite statistics are provided in the Appendix. The content is based on courses that have been taught both online and in intensive form for over two decades. Although first principles are emphasised, much of the book is based on research conducted by the two authors and their colleagues.
Visa hela texten

David Andrich BSc, BEd (Hons.), MEd (UWA), PhD (Chic) FASSA completed degrees in Mathematics and Education before receiving a Fulbright Award for PhD study at the University of Chicago, USA, where his dissertation earned the Susan Colver Rosenberger prize for Social Sciences in 1973. He took on a position at The University of Western Australia, and in 1985 was appointed a Professor of Education at Murdoch University in Western Australia, where he also served as Dean for two terms. In 2007 he returned to The University of Western Australia as the Chapple Professor of Education. He is currently a Visiting Professor of Educational Assessment at the University of Oxford. He has held research grants from the Australian Research Council continuously since 1985 and has conducted commissioned research at the national and state levels. He was elected a Fellow of the Academy of Social Sciences of Australia for his contributions to social measurement. He is especially known for his contributions to Rasch measurement theory, where his work has ranged from the philosophy of measurement, through model exposition and interpretation, to software development. He is the author of Rasch Models for Measurement (Sage). Ida Marais BSc, (North-West), MSc, PhD (Auckland) is a Senior Research Fellow at the Graduate School of Education's Psychometric Laboratory at The University of Western Australia. After graduating with a degree in Computer Science and Psychology, she worked as a computer analyst / programmer for a number of years before being awarded a University of Auckland doctoral scholarship and completing her MSc and PhD in Cognitive Psychology. Since then she has been a researcher and lecturer in the fields of Psychology, Health and Education in New Zealand and Australia. Her research activities focus on psychological and educational measurement, especially the measurement of change over time. Using simulation software she developed, she also studies the effects on estimates of data that violate the Rasch model.