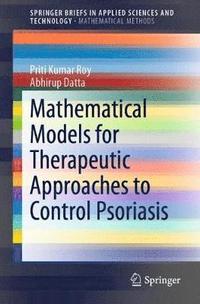 av Priti Kumar Roy, Abhirup Datta
Häftad Engelska, 2019-07-30
769
Köp
Spara som favorit
Finns även som
Visa alla 1 format & utgåvor
This book discusses several mathematical models highlighting the disease dynamics of psoriasis and its control. It explains the control of keratinocyte concentration through a negative feedback mechanism and the effect of including a realistic time delay in that system. The effect of cytokine release is described in a mathematical model of psoriasis and further elucidated in two different mathematical pathways: the ordinary differential equation model system, and the fractional-order differential equation model system. The book also identifies the role of CD8+ T-cells in psoriasis by investigating the interaction between dendritic cells and CD8+ T-cells. Presenting an approach to control the fractional-order system to prevent excess production of keratinocyte cell population, the book is intended for researchers and scientists in the field of applied mathematics, health informatics, applied statistics and qualitative public health, as well as bio-mathematicians interested in the mathematical modeling of autoimmune diseases like psoriasis.
Visa hela texten

PRITI KUMAR ROY is Professor at the Department of Mathematics, Jadavpur University, India. His areas of research are nonlinear system dynamics and mathematical modeling, primarily in infectious diseases like HIV, cutaneous leishmaniasis, filariasis and autoimmune disease like psoriasis. He also researches enzyme kinetics, industrial mathematics in the production of biodiesel from jatrophacurcas plant and its oil production optimization. He has published over 110 peer-reviewed papers in several respected journals. He is the author of Mathematical Models for Therapeutic Approaches to Control HIV Disease Transmission (Springer) and has edited the book Insight and Control of Infectious Disease in a Global Scenario. Professor Roy is an eminent member of various national and international societies like the Biomathematical Society of India, International Association of Engineers, European Society of Clinical Microbiology and Infectious Diseases and European Society for Mathematical and Theoretical Biology. He was the first person in India to supervise research on mathematical models of psoriasis. Professor Roy received the Best Paper Award at the World Congress on Engineering 2010, held in London, UK, as well as the Shiksha Ratan Award from the Government of West Bengal in 2012. He was the principal investigator for seven research projects sponsored by the Government of India. His DST-RFBR project with the Moscow State University was selected in 2018. He was the recipient of a Royal Society Fellowship and a Poland Academy of Science Fellowship, and was sponsored by The Royal Society of Edinburgh under the INSA-Royal Society Bilateral Exchange Program at the University of Strathclyde, Scotland, UK, and the Poland Academy of Science under the INSA-PAS Bilateral Exchange Program at the University of Warsaw, Poland. He received the Open Arms award at the International Congress of Mathematics (ICM) 2018, Brazil. He is a permanent Visiting Professor at Beijing Technology and Business University, China. Professor Roy has delivered invited lectures at over 45 overseas universities and institutes across Europe, Asia, and America and numerous lectures at several Indian universities. ABHIRUP DATTA is Assistant Professor at the Department of Mathematics, Netaji Satabarshiki Mahavidyalaya, West Bengal, India. He was awarded a Junior Research Fellow by the CSIR, India, and completed his Ph.D. under the guidance of Professor Priti Kumar Roy at the Department of Mathematics, Jadavpur University, in 2016. Dr Datta is the first researcher in India to be awarded a Ph.D. degree on the topic of mathematical modeling of psoriasis. He has published more than 20 research articles in various leading international journals, and he has attended and delivered lectures at more than 20 national and international conferences and at prestigious universities and institutes in India.