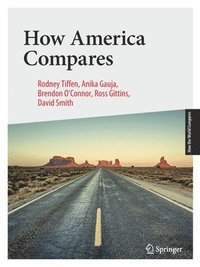 av Rodney Tiffen, Anika Gauja, Brendon O'Connor, Ross Gittins, David Smith
Häftad Engelska, 2019-11-27
339
Köp
Spara som favorit
Finns även som
Visa alla 1 format & utgåvor
This book is a reference work with an encyclopedic range, offering contemporary and systematic comparisons between the United States and 17 other economically advanced, stable liberal democracies, as well as some more global comparisons. It offers international data on as many aspects of social life as possible, from taxation to traffic accidents, homicide rates to health expenditure, and interest rates to internet usage. Wherever possible, it offers not only the most recent available data but also trends over decades. The discussion focuses on changes over time and comparisons between countries. Sometimes the contrasts are striking; sometimes the commonalities are more instructive. Often national political debates are conducted in a vacuum, and examining comparative data on policies, performance, and prospects can give a better perspective.
Visa hela texten

Rodney Tiffen is Emeritus Professor of Government and International Relations at the University of Sydney and a Fellow of the Australian Academy of Humanities. His research interests include comparative democratic politics, and mass media. David Smith is a Senior Lecturer jointly appointed between the United States Study Centre and the School of Social and Political Sciences. His research examines political relations between states and minorities with a focus on religion in the US. He is a regular commentator in the Australian media on American politics. Brendon O'Connor is Associate Professor at the United States Studies Centre (USSC), University of Sydney. He is the coordinator of the University's American Studies program and the Director of the Faculty Scholars Program. His research focuses on anti-Americanism, American welfare policy, presidential politics, US foreign policy, and Australian-American relations. Ross Gittins is one of the leading economic commentators in Australia, and has been the Economics Editor of the Sydney Morning Herald for over 30 years. He has authored or co-authored ten books, most recently Gittins: A Life among the Budgets, Bulldust and Bastardry. Anika Gauja is Associate Professor in the Department of Government and International Relations, University of Sydney. Her research interests centre on the comparative analysis of political institutions in modern representative democracies, specifically looking at the operation of political parties and legislatures, assessing the continuing relevance of these institutions as mechanisms for citizen participation in politics and their ability to represent diverse and conflicting interests