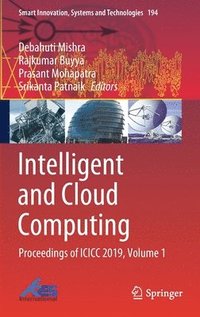 Prof. (Dr.) Debahuti Mishra received her BE degree in Computer Science and Engineering from Utkal University, Bhubaneswar, India, in 1994; the M.Tech degree in Computer Science and Engineering from KIIT Deemed to be University, Bhubaneswar, Odisha, India, in 2006; and the Ph.D. degree in Computer Science and Engineering from Siksha O Anusandhan Deemed to be University, Bhubaneswar, India, in 2011. She is currently working as Professor and Head of the Department of Computer Science and Engineering, Fcaulty fo Engineering and Technology (ITER) Siksha 'O' Anusandhan Deemed to be University, Bhubaneswar, India. Her research interests include data mining, data acquisition, bioinformatics, software engineering, soft computing and machine learning. She contributed five books and more than 150 research papers in many National and International journals and conferences and also nine Ph.D. scholars are awaded with Ph.D. degree under her supervision. Dr. Rajkumar Buyya is a Redmond Barry Distinguished Professor and Director of the Cloud Computing and Distributed Systems (CLOUDS) Laboratory at the University of Melbourne, Australia. He is also serving as the founding CEO of Manjrasoft, a spin-off company of the University, commercializing its innovations in Cloud Computing. He served as a Future Fellow of the Australian Research Council during 2012-2016. He has authored over 625 publications and seven text books including "Mastering Cloud Computing" published by McGraw Hill, China Machine Press, and Morgan Kaufmann for Indian, Chinese and international markets respectively. He also edited several books including "Cloud Computing: Principles and Paradigms" (Wiley Press, USA, Feb 2011). He is one of the highly cited authors in computer science and software engineering worldwide (h-index=123, g-index=271, 79,000+ citations). "A Scientometric Analysis of Cloud Computing Literature" by German scientists ranked Dr. Buyya as the World's Top-Cited (#1) Author and the World's Most-Productive (#1) Author in Cloud Computing. Dr. Buyya is recognized as a "Web of Science Highly Cited Researcher" for three consecutive years since 2016, a Fellow of IEEE, and Scopus Researcher of the Year 2017 with Excellence in Innovative Research Award by Elsevier for his outstanding contributions to Cloud computing. Software technologies for Grid and Cloud computing developed under Dr. Buyya's leadership have gained rapid acceptance and are in use at several academic institutions and commercial enterprises in 40 countries around the world. Dr. Buyya has led the establishment and development of key community activities, including serving as foundation Chair of the IEEE Technical Committee on Scalable Computing and five IEEE/ACM conferences. These contributions and international research leadership of Dr. Buyya are recognized through the award of "2009 IEEE Medal for Excellence in Scalable Computing" from the IEEE Computer Society TCSC. Manjrasoft's Aneka Cloud technology developed under his leadership has received "2010 Frost & Sullivan New Product Innovation Award". Recently, Dr. Buyya received "Mahatma Gandhi Award" along with Gold Medals for his outstanding and extraordinary achievements in Information Technology field and services rendered to promote greater friendship and India-International cooperation. He served as the founding Editor-in-Chief of the IEEE Transactions on Cloud Computing. He is currently serving as Co-Editor-in-Chief of Journal of Software: Practice and Experience, which was established ~50 years ago. For further information on Dr.Buyya, please visit his cyberhome. Dr. Prasant Mohapatra is serving as the Vice Chancellor for Research at University of California, Davis. He is also a Professor in the Department of Computer Science and served as the Dean and Vice-Provost of Graduate Studies at University of California, Davis during 2016-18. He served as an Associate Chanc