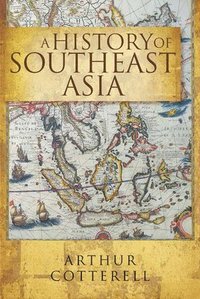 A History Of South East Asia,

Here at last is an enjoyable survey of Southeast Asia's past... The author's ability to relate events in an accessible and exciting way is bound to make A History of Southeast Asia an invaluable contribution to the on-going debate about the region's future. -- Hugh Higgins, author of Vietnam

Arthur Cotterell was formerly principal of Kingston College, London. He has lived and travelled widely in Asia and Southeast Asia, and has devoted much of his life to writing on the region. In 1980, he published The First Emperor of China, whose account of Qin Shi Huangdi's remarkable reign was translated into seven languages. Among his recent books are Western Power in Asia: Its Slow Rise and Swift Fall 1415-1999, published in 2010, and described by The Japan Times as "three-dimensional historiography at its best"; and Asia: A Concise History, published in 2011.