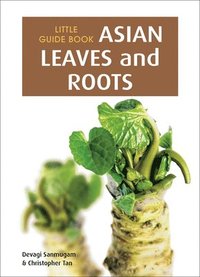 av Devagi Sanmugam, Christopher Tan
Häftad Engelska, 2014-10-15
89
Köp
Spara som favorit
Skickas inom 7-10 vardagar.
Fri frakt inom Sverige över 159 kr för privatpersoner.
Walking around an Asian wet market can be a fascinating experience, full of tantalising sights, sounds, smells and new tastes to discover. However, it can also be daunting to those who aren't familiar with the heaps of produce on display. This book, featuring some 40 Asian ingredients, will shed light on those attractive bunches of leaves and soil-dusted root vegetables, and act as a practical guide to how they can be used to whip up scrumptious dishes.
Visa hela texten

Celebrity chef, cookbook author, food columnist, cooking instructor and entrepreneur, Devagi Sanmugam is one of Singapore's most dynamic and talented food personalities. Starting as a cooking instructor more than 20 years ago, Devagi has since built an impressive portfolio including writing more than a dozen cookbooks. She continues to innovate, being constantly involved in developing and testing original recipes for food companies, restaurants and magazines. Widely known as the Spice Queen of Singapore, Devagi has also hosted a number of television cooking shows for local and foreign media. Christopher Tan is a writer, food consultant and author. A contributor of articles, photographs and recipes to international periodicals such as Saveur, Food & Travel, The Peak and Appetite magazines, he is also a food columnist for Singapore's Sunday Times. Chris regularly conducts talks, demonstrations and cooking classes on cuisine and culture at venues which have included Singapore's National History Museum and Peranakan Museum, the Sydney International Food Festival, the Musee Quai Branly in Paris, and the Culinary Institute of America. He has authored, co-authored, styled photos for and edited many cookbooks.