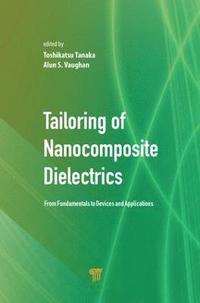 From Fundamentals to Devices and Applications

av Toshikatsu Tanaka, Alun S Vaughan
Inbunden Engelska, 2016-10-06
2139
Köp
Spara som favorit
Skickas inom 5-8 vardagar.
Fri frakt inom Sverige för privatpersoner.
Finns även som
Visa alla 2 format & utgåvor
This book illustrates interfacial properties, preparation, characterization, devices, and applications from the standpoint of nano-interfacial tailoring. Since the primary focus of the book is on the use of nanocomposite dielectrics in electrical applications, chapters are devoted to directly relevant topics, such as surface and bulk breakdown processes. However, the mechanisms that underpin such behavior are not unique. Therefore, the book also addresses related topics that range from the chemistry of polymer and nanocomposite degradation to the simulation of charge transport dynamics in disordered materials, thereby presenting a multi- and interdisciplinary approach to the area. It will serve as a practical handbook or graduate textbook and is supplemented by ample number of illustrations, case studies, practical examples, and historical perspectives.
Visa hela texten

"This book gives an excellent review of polymeric nanocomposites for dielectric applications, a truly interdisciplinary field between chemistry, physics, and electrical engineering. It covers fundamental concepts and historical reviews of the scientific progress as well as new enablers for a rapid advance in this area. These include methods to chemically design interfaces on a molecular level, three-dimensional imaging technologies on a nanometer level, and the rapid progress in material simulations. From an engineering point of view, the book discusses current and new application areas for nanocomposite dielectrics in the electric power and electronics industry. An outstanding reference for both scientists and engineers." -Dr. Henrik Hillborg, ABB, Sweden "This book brings together contributions from researchers active in the area of nanocomposites for electrical applications. Nano-tailoring is the theme of this book. The book is loaded with the most recent information on nanodielectric research, information that can be applied by those who develop their own nanocomposites. Researchers working in this area of research will greatly benefit from reading this book. So also will those in electrical power engineering technology, who will be able to use it to understand the implications of nanocomposite materials for the future of power distribution, and other applications where dielectric and insulating materials exposed to an electric field can offer significantly improved electrical properties as a result of inclusion of nanoparticles." IEEE Electrical Insulation Magazine

Toshikatsu Tanaka is a research fellow at the IPS Research Center of Waseda University, Japan, professor emeritus at Xi'an Jiaotong University, China, and chair of the IEEJ Committee on Nanocomposites. He is a recipient of the Japanese Ministry of Science and Technology Prize (2000), Institute of Electrical Engineers of Japan (IEEJ) Technology Progress Award (1988), Institute of Electrical and Electronics Engineers (IEEE) Whitehead Memorial Lecture Award (2001), IEEJ Inuishi Award (2001), and IEEE Dakin Award (2002). Dr. Tanaka is an IEEE fellow and an IEEJ life fellow. He was the chair of the International Council on Large Electric Systems (CIGRE) Working Group on Nanocomposites for 6 years from 2006. Alun S. Vaughan has a BSc in chemical physics and a PhD in polymer physics from the University of Reading, UK. After undertaking postdoctoral research and working at the UK's Central Electricity Research Laboratories, he returned to academia and spent 11 years as a lecturer in physics at the University of Reading, before moving to the University of Southampton in 2000, where he is professor of dielectric materials and head of the Electronics and Electrical Engineering research group. Dr. Vaughan is a former chair of the Dielectrics Group of the Institute of Physics, UK, a fellow of the Institute of Physics and the Institution of Engineering and Technology, UK, and a senior member of the IEEE.