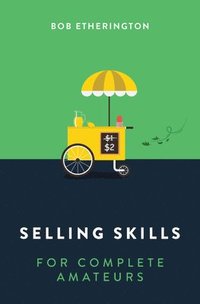 av Bob Etherington
Häftad Engelska, 2018-06-15
95
Köp
Spara som favorit
Skickas inom 10-15 vardagar.
Fri frakt inom Sverige över 159 kr för privatpersoner.
Finns även som
Visa alla 2 format & utgåvor
Nearly everyone within a company is involved in selling at one level or another. Yet, the majority of those people are not professional frontline salespeople - they have never received any training in selling or in dealing with customers. As a result, opportunities are missed and, worst, you may even have wrecked the relationship with the customer for the long term. Selling Skills for Complete Amateurs presents a set of basic skills for selling, aimed exclusively at those people who have never been trained in the art of selling. Based on the successful courses which the author has been running for over ten years for beginners in sales, this book is intended to enable anyone to make a sound contribution to the overall sales process. 10 reasons you must buy this book and stop wrecking sales efforts in your organisation! 1. Amateurs make 10 fatal selling statements that instantly turn customers off. 2. You can cut objections to your sales pitch by up to 90% (and deal easily with the remaining few) using a proven method. 3. A truly persuasive sales letter doesn't look anything like the attempts that amateurs make. 4. No validated research supports the business folklore that sales objections are "buying signals in disguise" - in fact they have the opposite effect! 5. Unconscious emotional need - that's what you need to generate when your customer is at the point of making a buying decision. 6. There are two key human attributes which you can use to encourage customers to persuade themselves for you. 7. "Telling isn't selling" - what can you do to make a massive change in the outcome of your next meeting with a customer? 8. Prolonging the investigative phase of your sale increases customer desire for the solution your product provides. 9. You don't want to be marooned in "great-presentation-we'll-call-you-soon" limbo. 10. Wake up to the real cause of the commonest objection of all - "You're too expensive" - and discover what you can do to stop it immediately.
Visa hela texten

For over 40 years, Bob Etherington has built a reputation for sales success in a career that has spanned many key global markets. From Rank Xerox in London, he was headhunted by Grand Metropolitan Hotels and then became a Money Broker in the City. He joined Reuters in the early 1980s and became a main Board Director for the Transaction Services in 1990, moving to New York in 1994 to take control of their major accounts strategy for US banks. In 2000, Bob left Reuters and set about expanding SpokenWord Ltd., a London-based sales training business he had already established with his then business partner and the company's current owner, Frances Tipper. Bob has conducted seminars and courses in selling, negotiation and presentations to major companies all around the world.