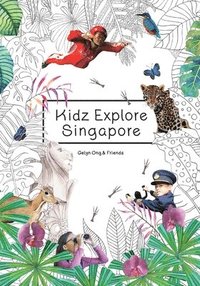 av Gelyn Ong
Häftad Engelska, 2020-02-15
129
Köp
Spara som favorit
Skickas inom 7-10 vardagar.
Fri frakt inom Sverige över 159 kr för privatpersoner.
Finns även som
Visa alla 1 format & utgåvor
Kidz Explore Singapore is probably the first travel guide to be fully written by children. The team, whose ages range from 6 to 14 years old, has reviewed interesting places to visit in Singapore and provided their candid feedback. The book is written in a fun and simplified manner that other children can relate to. Packed with colourful illustrations, awesome photos and bursting with exciting activities and fun facts, this travel guide is truly one of a kind. All the places featured were selected by the young writers. They share their experiences and highlight what they like most in each place including useful tips to make your visits even more fulfilling. Kidz Explore Singapore will provide families with the necessary information to plan their itinerary and have an awesome time when they visit Singapore.
Visa hela texten

Team leader Gelyn Ong is a 15-year-old child artist whose creative efforts are inspired by her interest in and passion for the natural environment. She started art at the tender age of two and since then, she has shown her compassion by helping the less fortunate. Her paintings and illustrations have raised more than S$800,000 for various charities. In addition, Gelyn has been appointed as WWF (World Wildlife Fund) Singapore's Young Ambassador since 2012. Gelyn's first illustrated book, The Forest Fable, published in June 2013 has won several awards and has also been translated into other languages such as Chinese and Vietnamese.