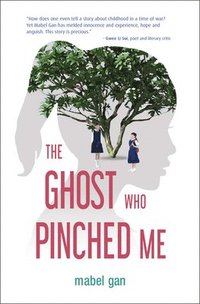 The Ghost Who Pinched Me

av Mabel Gan
Häftad Engelska, 2020-01-15
119
Köp
Spara som favorit
Skickas inom 7-10 vardagar.
Fri frakt inom Sverige över 159 kr för privatpersoner.
Finns även som
Visa alla 1 format & utgåvor
Something made me look from the amahs to the frangipani tree in the corner. And there she was-Ying. She was looking up at me. I shivered. Was my fever making me imagine things? I needed to tell Ma and Papa right away, but at this very moment, they were at Bukit Brown Cemetery, tending to Ying's funeral. Ten-year-old Bee Ling grows up sheltered and privileged in 1940s Singapore, jealous of her beautiful, perfect elder sister, Ying. When the Japanese attack Singapore, Ying is killed in an air raid at school. Shortly afterwards, Singapore is occupied by the Japanese and the family endure the wartime hardship and horrors that ensue. Her sister returns as a spirit to guide, protect and reassure her that she will survive the war. Bee Ling grows to appreciate what she has left and gains an understanding of the bonds of love that exist even in the face of devastating loss. Written with unflinching clarity through the innocent eyes of a child, this coming-of-age novel is an intimate portrait of love, family, resilience, and the power of sisterhood.
Visa hela texten

Bloggat om The Ghost Who Pinched Me

Mabel Gan is a writer, director, and producer whose work explores the lives of young people. She is the founder of Big Eyes, Big Minds: Singapore International Children's Film Festival and continues to produce the annual event as well as its sister film festival in St. Louis where she currently resides with her family. She has a Master of Fine Arts in Motion Picture Arts from Florida State University, where her thesis film, Child Bride, was a finalist at the Student Academy Awards. She wrote and directed the coming-of-age feature film, Sweet Dreams and Turtle Soup, and helmed numerous television shows, including Kids United