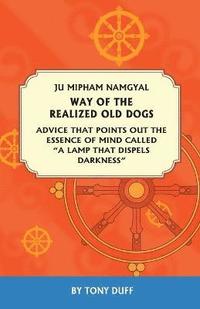 Way of the Realized Old Dogs

av Mipham Rinpoche
Häftad Engelska, 2011-04-18
201
Köp
Spara som favorit
Skickas inom 10-15 vardagar.
Gratis frakt inom Sverige över 159 kr för privatpersoner.
Ju Mipham Namgyal is one of the best known authors of the Nyingma tradition. He was a prolific writer with an extraordinary knowledge of his own and others' dharma traditions. He wrote several texts on the topics of innermost Great Completion (Dzogpa Chenpo). The one here is one of his texts on Thorough Cut (Tregcho). The wording of the title "Way of the Realized Old Dogs" is explained in the introduction by the author. Briefly though, it means that this is a text that lays out the way of practice of those who just practise the essence of their own minds and who develop realization that way. Through this, they eventually become realized in the system and wise to it; they become "Realized Old Dogs".

The text is a favourite of tantrikas, or, in Tibetan, ngagpas. It is a favourite for them because it is specifically for practitioners who do not live in a monastery or other dharma institution and who do not spend their lives developing a vast scholastic knowledge of Buddhism. In modern, Western terms, it is a text written specifically for the urban yogi. As the text says,

"Without need of vast training in hearing and contemplating
The village tantrikas in general who preserve the essence of mind
Using the way of foremost instruction will go with little hardship
To the level of the vidyadharas; it has the power of a profound path."

The text is short but has become one of the core texts used in Tibet to teach Thorough Cut. Because it is so popular within the Tibetan tradition and because it was specifically written for the urban yogi, we felt that it was a worthy addition to our selection of texts on the subject of Thorough Cut. Therefore, we have translated it and made a book out of it.

As with each of our texts on Thorough Cut, this one has its own flavour and does emphasize certain aspects of the path. As it lays out the approach of the urban yogi, it has to present the introduction (often called pointing out) to the nature of mind. It does this in using what are called "differentiations". This is unusual because differentiations are usually transmitted orally from the teacher to the student and mostly are not written down. There are many differentiations; in this case Mipham sets out the differentiation between alaya and dharmakaya. The presence of this teaching is another reason for adding this to a library of teachings on Thorough Cut.
Visa hela texten