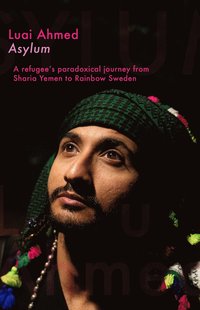 Av Luai Ahmed
Provläs den här och tusentals andra böcker i Bokus Play - det smarta abonnemanget för e-böcker:
Prova fritt i 14 dagar! Läs mer om Bokus Play
Asylum is a woeful yet comical memoir by 27-year old Luai Ahmed about his first 5 years in Sweden. Being a reformist secular ex-Muslim writer, Ahmed found himself at a crossroads when his family told him to seek asylum in Sweden in 2014 because of the death threats which his family received due to his mothers feminist activism. Little did his family know that he followed their order and fled because he was secretly gay.

Moving from one of the worlds most religious and conservative countries to one of the least religious and most liberal countries in the world, Ahmeds escape from Islam turned out to be paradoxical in the haven of tolerance that is Sweden. While Yemen was ruled by Sharia law and thereby sentenced homosexuals and atheists like himself to death, Ahmed ended up being just as critical towards Sweden, the country that saved his life from Yemen, the very theocracy that thirsted for his blood.
Frågor & svar