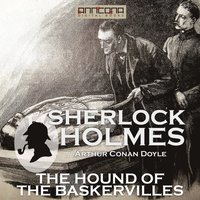 Av Arthur Conan Doyle
• Uppläst av David Clarke
Lyssna på den här och tusentals andra böcker i Bokus Play - det smarta abonnemanget för ljudböcker:
Prova fritt i 14 dagar! Läs mer om Bokus Play
The Hound of the Baskervilles is the third of the four crime novels written by Sir Arthur Conan Doyle featuring the detective Sherlock Holmes. Originally serialised in The Strand Magazine from August 1901 to April 1902, it is set largely on Dartmoor in Devon in England's West Country and tells the story of an attempted murder inspired by the legend of a fearsome, diabolical hound of supernatural origin. Sherlock Holmes and his companion Dr. Watson investigate the case. This was the first appearance of Holmes since his intended death in "The Final Problem", and the success of The Hound of the Baskervilles led to the character's eventual revival.

In 1902, Doyle's original manuscript of the book was broken up into individual leaves as part of a promotional campaign by the Doyle's American publisher - they were used as part of window displays by individual booksellers. Out of an estimated 185 leaves, only 36 are known to still exist, including all the leaves from Chapter 11, held by the New York Public Library. Other leaves are owned by university libraries and private collectors. A newly-rediscovered example was sold at auction in 2012 for US$158,500.

Sir Arthur Conan Doyle (1859-1930) was a Scottish physician and writer, most noted for his stories about the detective Sherlock Holmes, generally considered a milestone in the field of crime fiction, and for the adventures of Professor Challenger. He was a prolific writer whose other works include science fiction stories, plays, romances, poetry, non-fiction and historical novels.

Sherlock Holmes is a London-based "consulting detective" whose abilities border on the fantastic, Holmes is famous for his astute logical reasoning, his ability to adopt almost any disguise, and his use of forensic science skills to solve difficult cases. Holmes, who first appeared in publication in 1887, was featured in four novels and 56 short stories.